Day 6 The guys entered a new glacier today and saw the first humans after leaving Longyearbyen 6 days ago. They felt competitive and got the urge to pass the other expeditioners, but to no avail. They saw another 2 groups of explorers soon after and realized it wasn’t the best idea to push the pace – especially after speaking to one of them who’ve just been at «Verlegenhuken», the end goal of the expedition.

They’re in for some tiresome conditions. He could tell about fresh snow and a really uneven terrain ahead of them, and his frozen beard and chapped lips showed them that he probably told the truth. Good weather today. Almost 15km, with 838m of elevation.

The course for «Newtontoppen» is set, and tonights camp is at the outskirts of Sassen–Bünsow Land National Park, 779m above sea level. 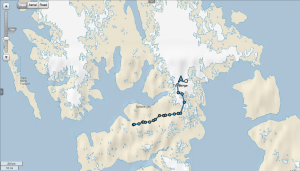 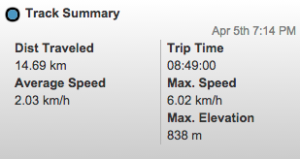