The High Route in Jotunheimen was Conducted in March 2016

It was the week before Easter, and I got a call from Tor after a late night working: ”Do you know your plans for Easter?”. I knew that my plans was to go to Hemsedal, to the family cabin, but my response was curiously ”No?”.

A week later, Tor picked me up in Beitostølen and we drove a 5 hour de-tour around the mountains of Jotunheimen because the summer-road through Beitostølen was still closed.. When we arrived Gjendebu, we drove all the way to Krossbu with the second car, only to return to Gjendebu once again. A very long day spent in the car, but both of us were still stoked for what’s coming the following day. Due to the fact that the trip was very spontaneous, it was also not as well planned for. A decision we consequently would answer for during the following days of skiing through the mountains. When the last preparations is mounting a drone to the back frame of a stripped backpack with some straps the night before, the trip isn’t planned optimally. Nevertheless, the mood was as always on these trips, high as life! With three of us with flu, stomach sickness and hard blisters, this would be one for the memory book! 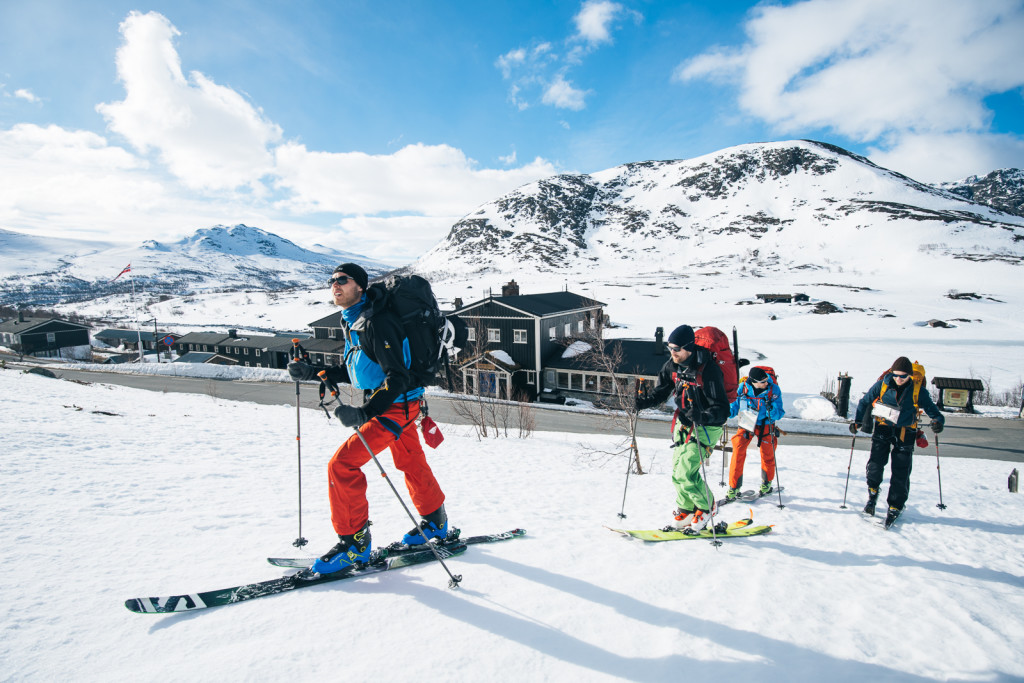 The first stage was planned from Gjendebu, climbing Besshøe (2258m) and down to Memurubu. During the last couple of days or weeks it had been cold and windy, in other words, the snow wasn’t at its best. We started the trip on a Sunday, partially cloudy wind speeds of around 10-15m/s. Excited to start, the wind didn’t bother us at all. A couple of hours in, we started climbing Bessehøe, where we realized that one of our friends didn’t have crampon-mounts on his skis, as would make traversing easier on the ascends. Nonetheless, we made it to the top, and as we did, the sun showed itself through the clouds. 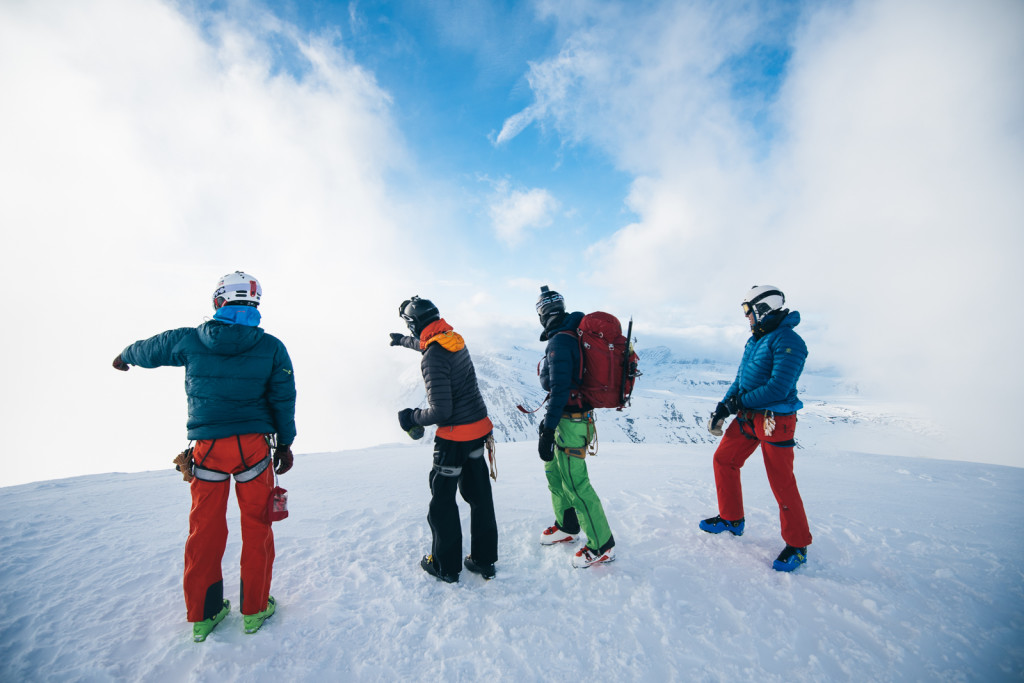 Super stoked on skiing down to the cabin, we started descending when the sun was still present. We soon found that the lack of snow made it impossible to ski all the way down and we mounted the skis on our backpacks and attached crampons on the boots. We then realized the downside of Tor´s homemade backpack. With the lack of ski-mounts, Bjørn´s backpack really got tested (finally he took some weight off Tor’s backpack). Traversing down the couloir, we ended up on a shelf to attach the skis again. The steep couloir had terrible snow and ice, or a “10 out of 10-rating” as Sindre said ironically. The darkness came really fast, and our headlamps became useful, even though it wasn’t necessary due to the full moon above us. We arrived Memurubu late, but the staff thawed the food for us, and made us a 3-course meal before bed. Thanks!! We ended up skiing around 20km with about 1300 altitude meters (a.m) that day. 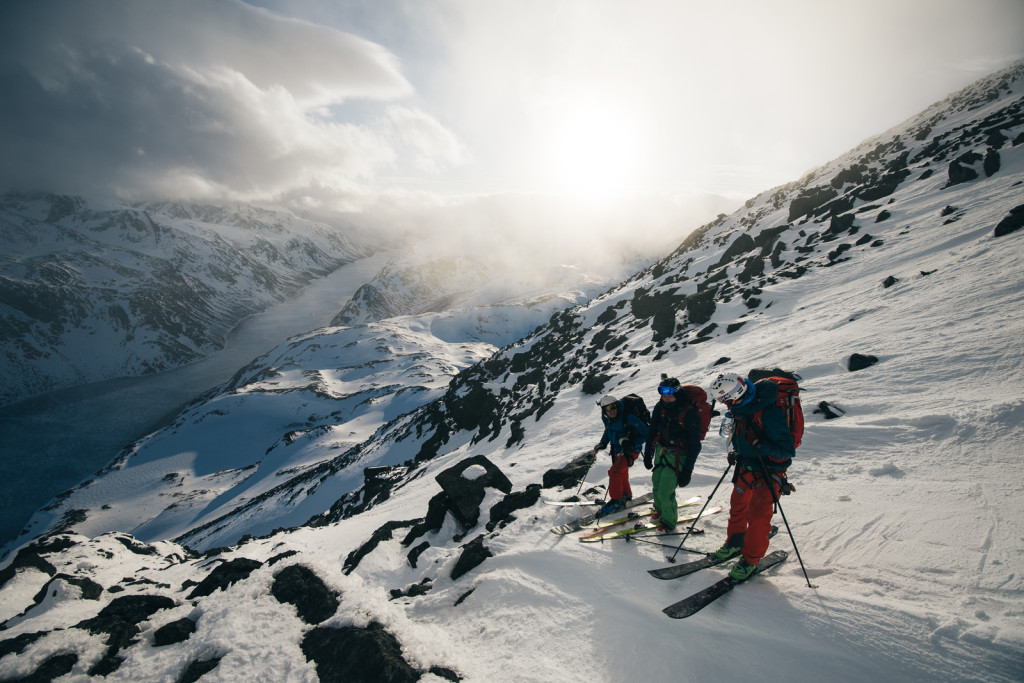 On the following day, at the second stage of the trip, one of the guys in our company had become ill during the night and decided to end the trip. He got picked up by a snowmobile and driven away as the 4 of us continued. The weather had improved and the first 800 altitude meters got by quickly. Getting closer to Surtningssue, we met a wall where we yet again needed to mount the skis to the packs and boot up. Near the top, the weather changed, and we almost stumbled into the small emergency-cabin we were looking for. Inside, we could just about fit 4 guys, which made for a great lunch break with the terrible weather outside. After a break, we ascended Surtningssue before removing the skins under the skis to descend down to “Blåbrean” (The blue glacier). We dropped down from the snow-dune at the top into a steep decline. Since the visibility was poor, the timing for the small drop was adjusted to the timing of the wind gusts. If dropping into the steep side with wind gusts working, it was impossible to see the snow below us and we would ski blind. During Tor´s drop, the camera lense cover fell off, as usual. After 30 minutes of hopeless searching, we continued skiing without it, and made a provisional one with some electrical tape and a sock. 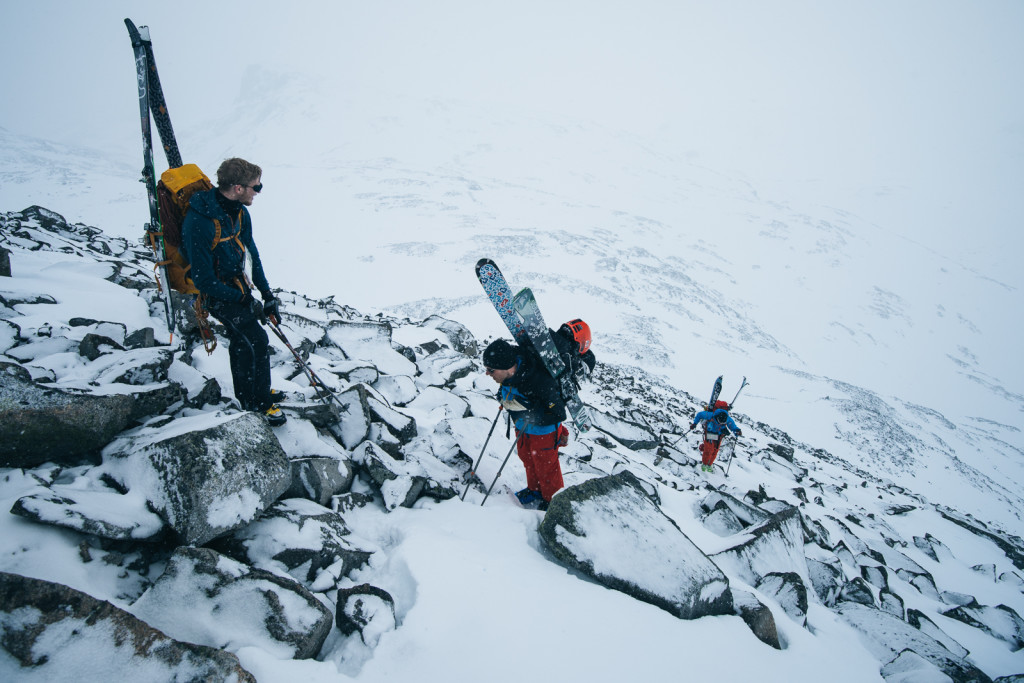 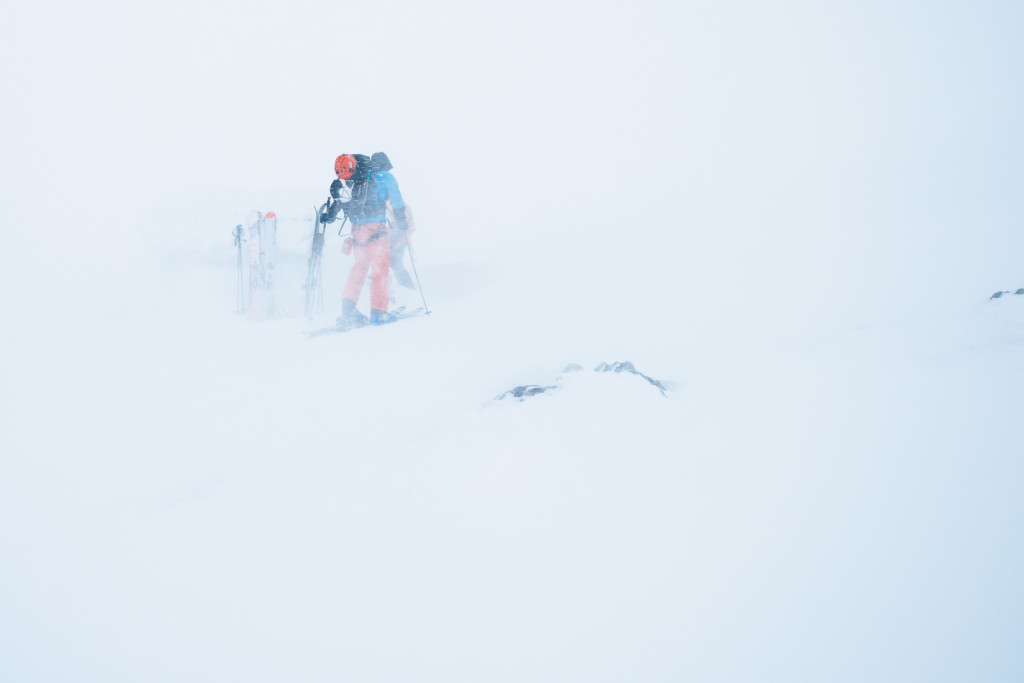 All the way down on the glacier, at the bottom, we were only a couple of hours from Glitterheim and on track. Unfortunately, we made a wrong turn in the snowbliss. This made us ski a 8-10km longer route to Glitterheim. Hopeless without cellphone-conection, we had to use the Inreach to ask for the coordinates, which helped us on the right track again. We also sent a message to Glitterheim to keep the dinner hot. Arriving late, yet again, was almost an embarrassment, but made the trip even more memorable and the dinner tasted even better. The local food, as it is served on all of these cabins, tastes extraordinary after the long trips in Jotunheimen. This time, we were served reindeer soup, which we ate a whole lot of to say at least, before going straight to bed. On day 2 we  laid back approximately 24km and 1600 a.m. due to the direction mistake. 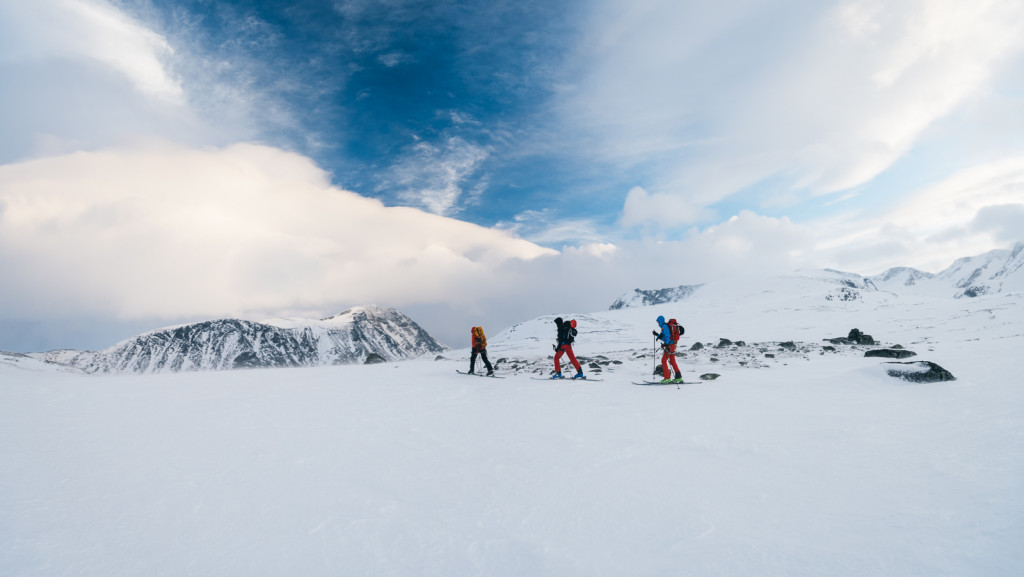 On day 3 we were hoping to finally get to use our drone that we had carried all the way. And to this point, all the work for nothing. The sun listened to us and showed itself from a bluebird sky. The weather was much better at start, and there were actually people at Glitterheim, compared to in the first two cabins. The snow was better, and the mood for flying the camera drone likewise. 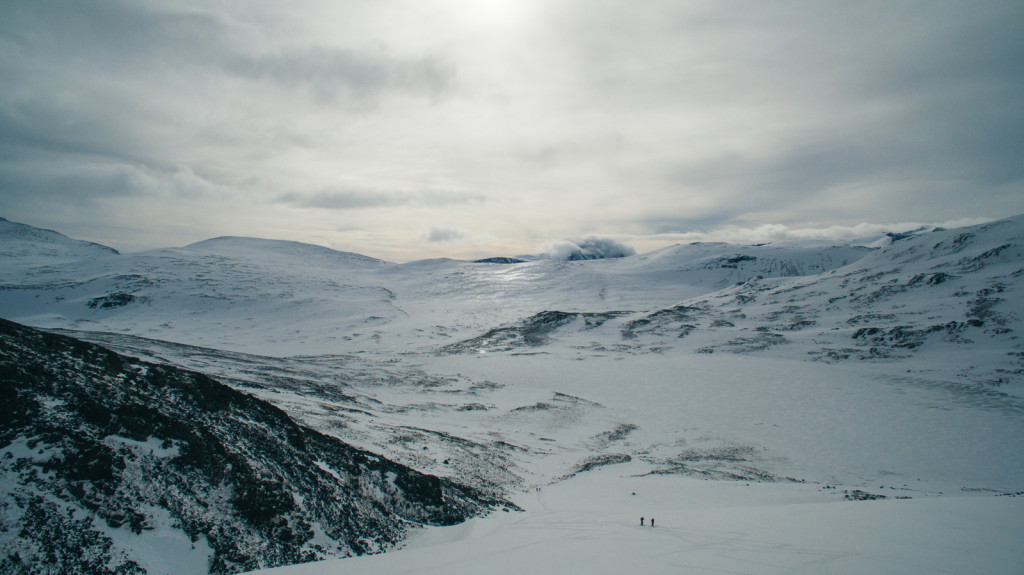 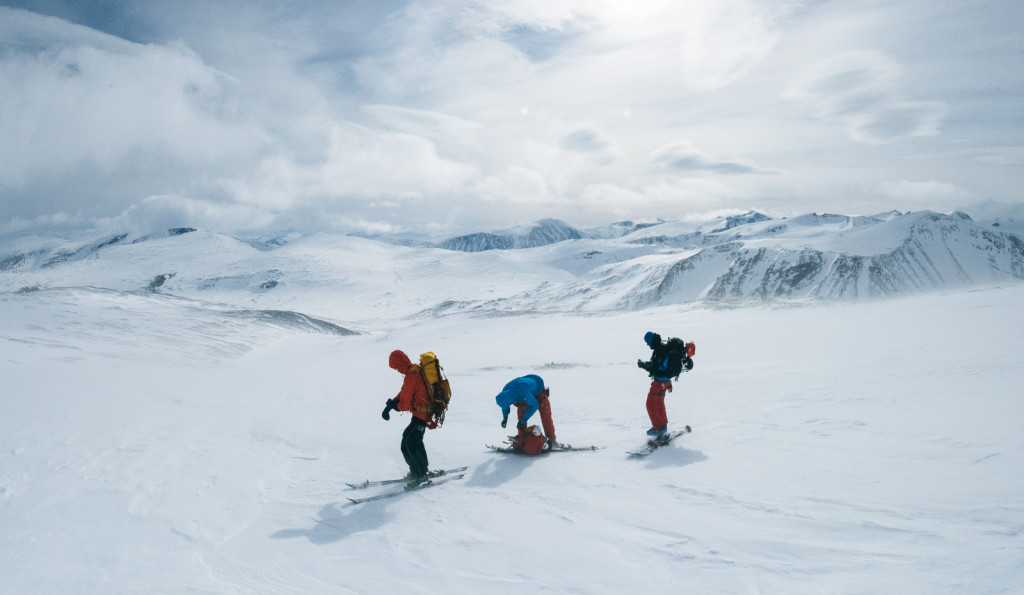 Ascending Glittertind, Norways second tallest mountain, took us nearly 3 hours with steady pace, including some pictures from above. As we were arriving the top to get to see Norway from its roof, the weather changed yet again for the worse. The visibility at the top was zero. And we only focused on getting down safe, without falling down the huge drops on both sides of the ridge at the top. This was done by a GPS to a fellow skier and the compass set on course. Slowly, we managed to descend safely in the bliss. We skied one by one on a long line. Finally, the visibility turned for the better as we dropped altitude, and we could ski on good snow almost all the way down to Spiterstulen, in good time for dinner at the normal hours. We even had time for a bath at Spiterstulen and a trip in the Sauna. The third stage, which was the shortest of, was a total of 14km and 1100a.m. 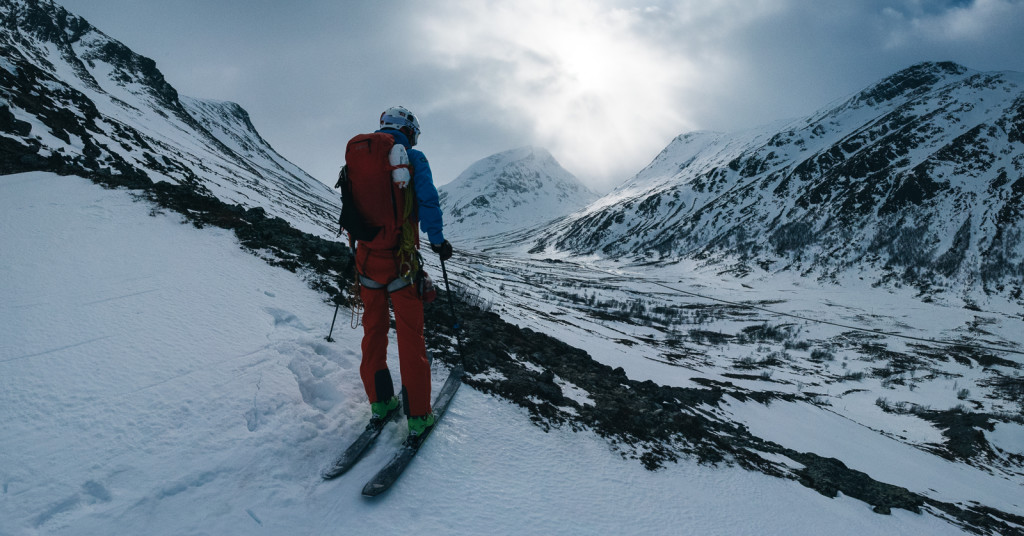 Day 4 was a day we were really looking forward to due to the great weather forecast, which actually was understated. Blue sky´s and t-shirt-weather on the way up to Galdhøpiggen (2469m), Norways tallest mountain.. The weather forecast for the following day was also at its worst, so we decided to end the trip after this stage, and not continue on to Krossbu. But what a day to finish! The snow was nearly perfect. Zero clouds on the sky. And we got to ski down the mountain without tracks in front of us. The cheers from the top and all the way down again to Spiterstulen were many and impossible to hold back on. We also managed to get some insane footage at our greatest mountain, on a perfect day skiing. And driving home, we had a huge smile on our sunburned faces. What an unbelievable perfect day to finish a great tour. Already looking forward to next time going the same route, just without stomach sickness, blisters and the flu, ha ha! Bad luck, but we pulled through anyways. Thanks for the trip guys! 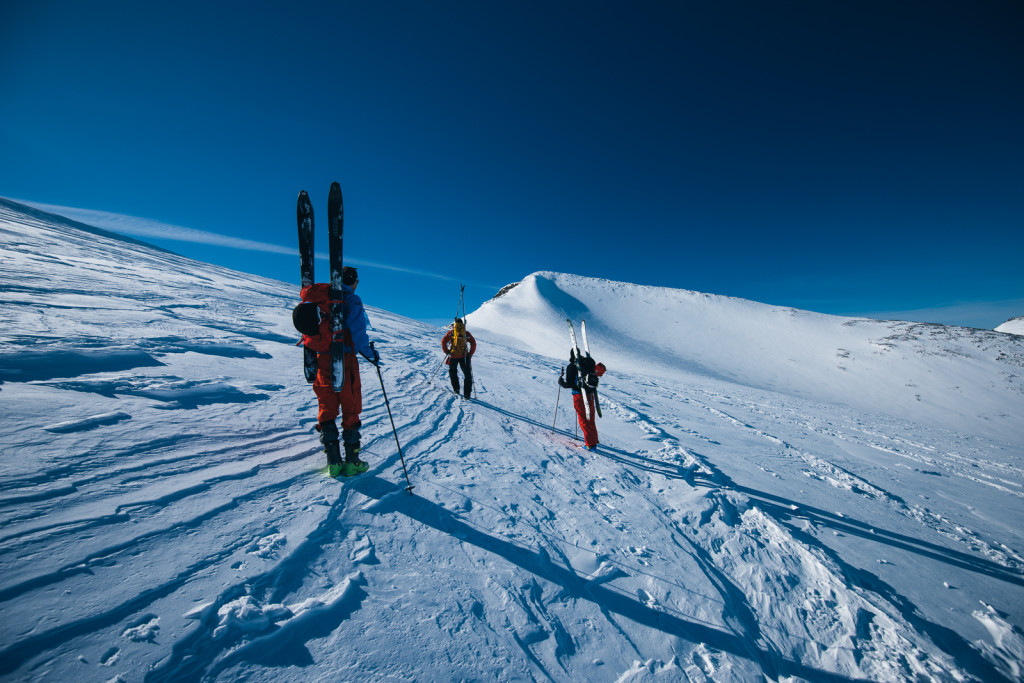 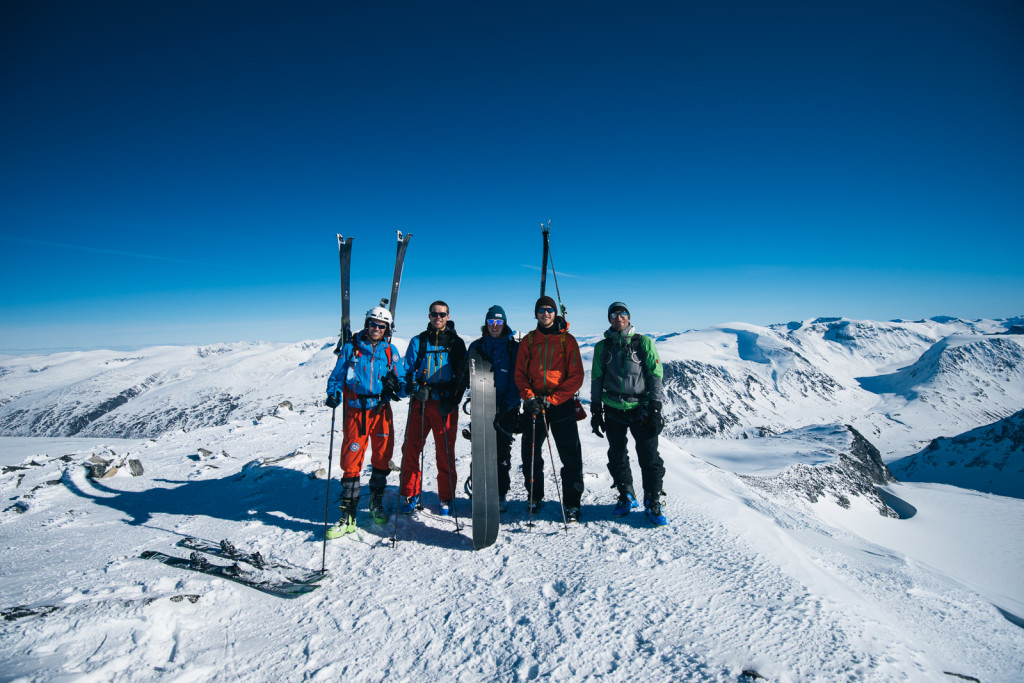 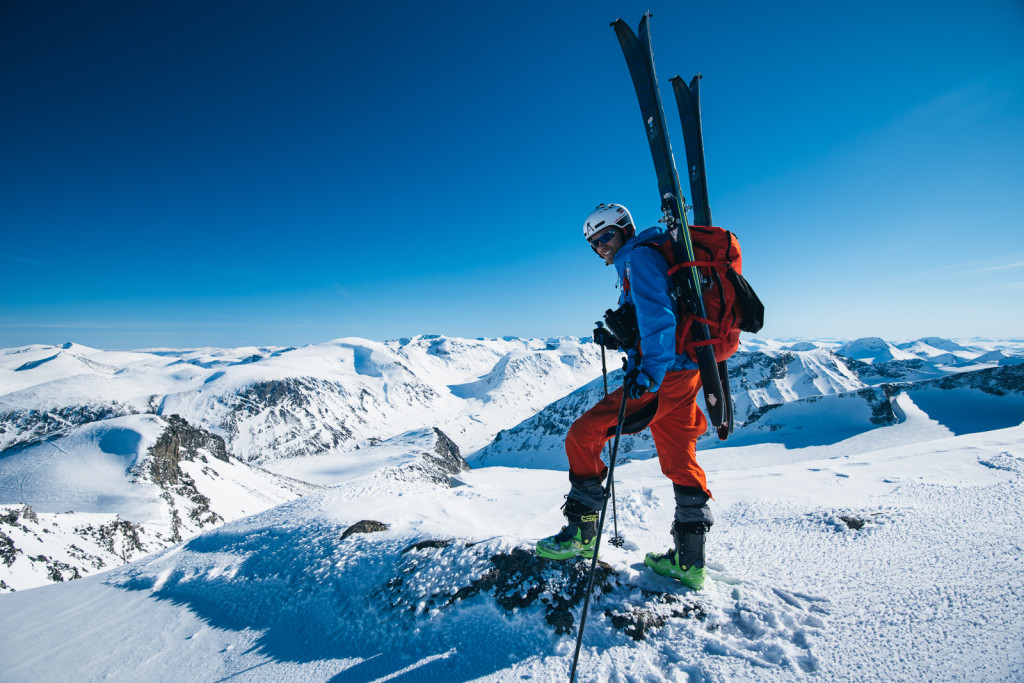 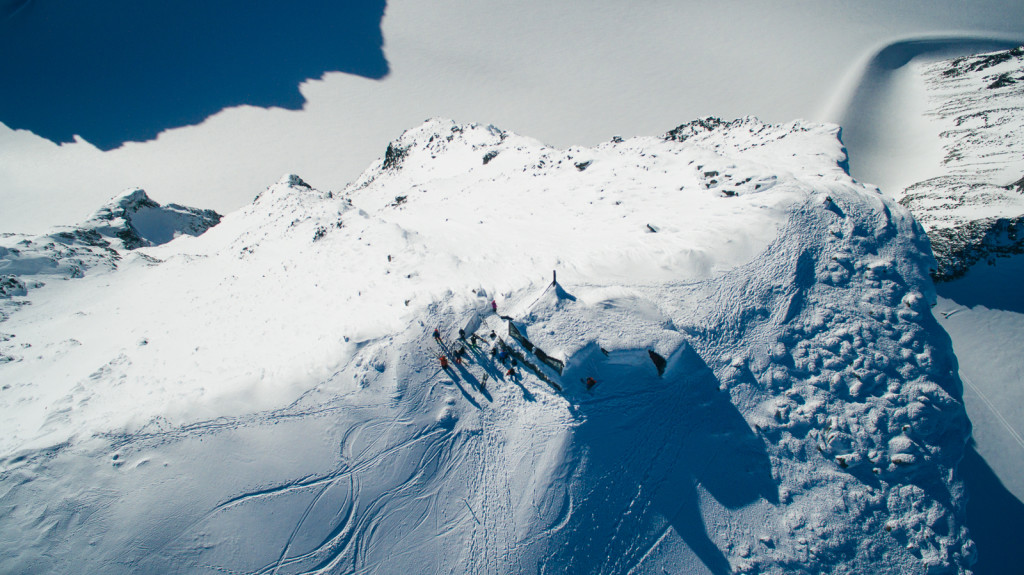 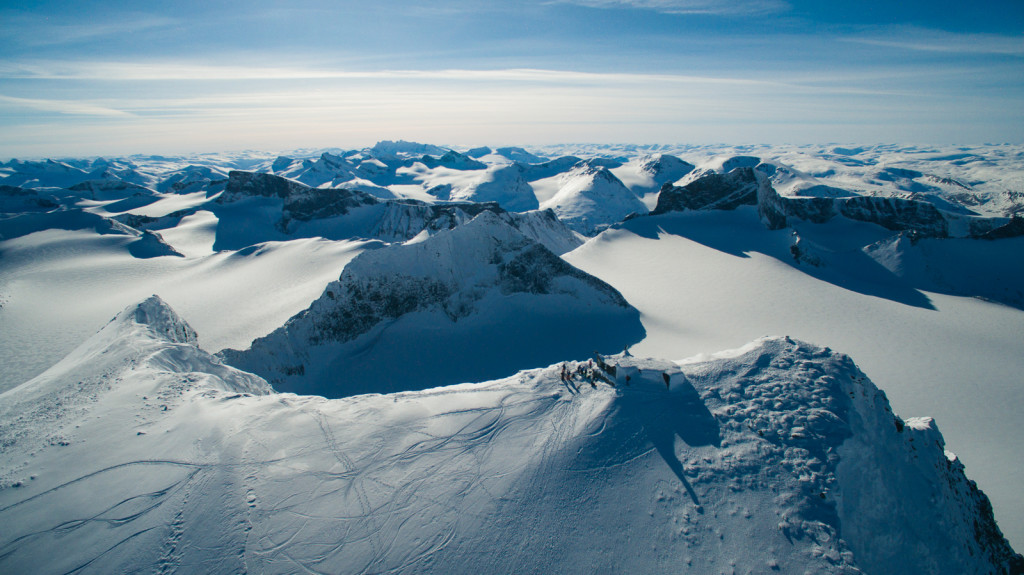