The Expedition was Conducted in April 2015

During almost a year of planning and organizing the expedition to Svalbard, both of us had been filled up with thoughts and questions about… well, everything. With heavy snow sleds, hungry polar bears, ice glacier crevasses and a weather that is largely fluctuating between the extremes, how would we get through the Svalbard expedition without incidents? Actually, and more importantly, was how to get through this alive. With only the two of us in the expedition company, should we keep a polar bear watch during the night? If not, what if the polar bear is getting through both of the trip wires, and one of us is waking up during the night being dragged out of the tent by the huge predator? In the case of one of us falling down an ice crevasse, would the other person be able to hold him and the snow sled, or would the weight pull him down too? The expedition planning triggered infinitely many questions and a large number of challenges. 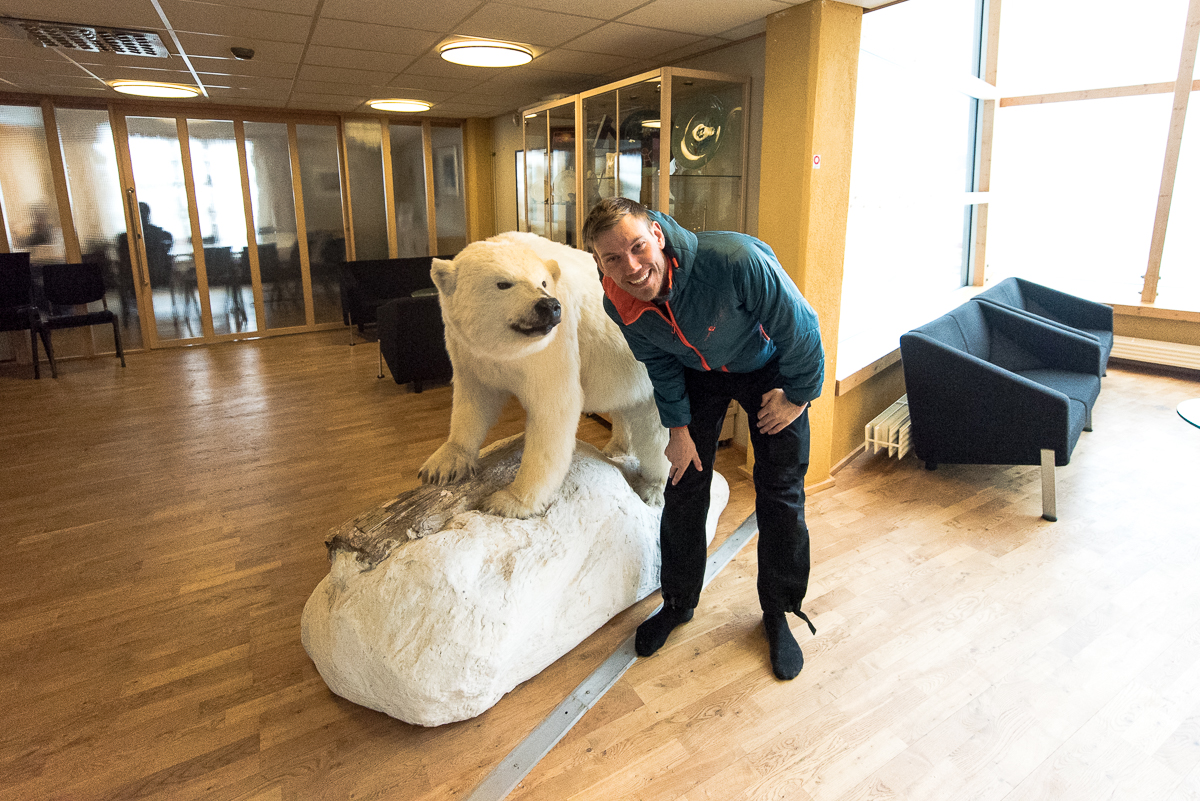 Suddenly, we find ourselves at the airport at Svalvbard with two snow sleds packed to their limit, skiing bags and duffel bags are supplementing the extra food and equipment that we still have to push and force into the snow sleds. The two following days is stressful with a visit to the governors office to retrieve the necessary documents for the expedition, followed by a visit to Spitzbergen Trevels to pick up rifle number two and the trip wires. We also had to perform a last-minute shopping of food and equipment, and spent many hours of packing and arguing with the snow sleds, as of which didn’t accomodate the needed room and space for all of our gear. To organize the snow sleds properly is very important  to save time and frustration during the expedition. We wouldn’t want to search through four bags in different parts of the snow sled just to find our lunch. 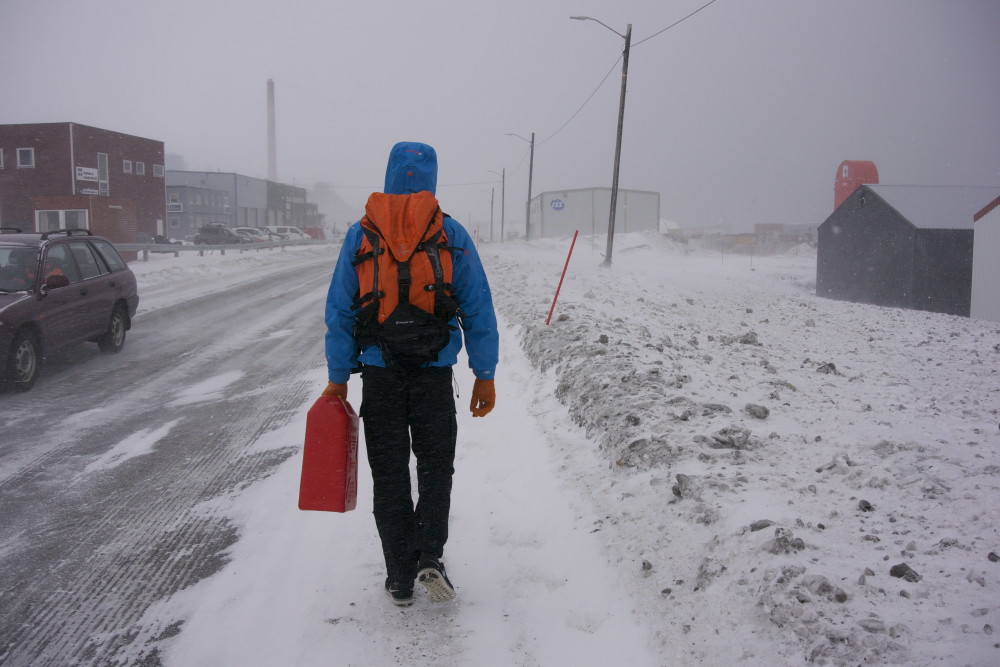 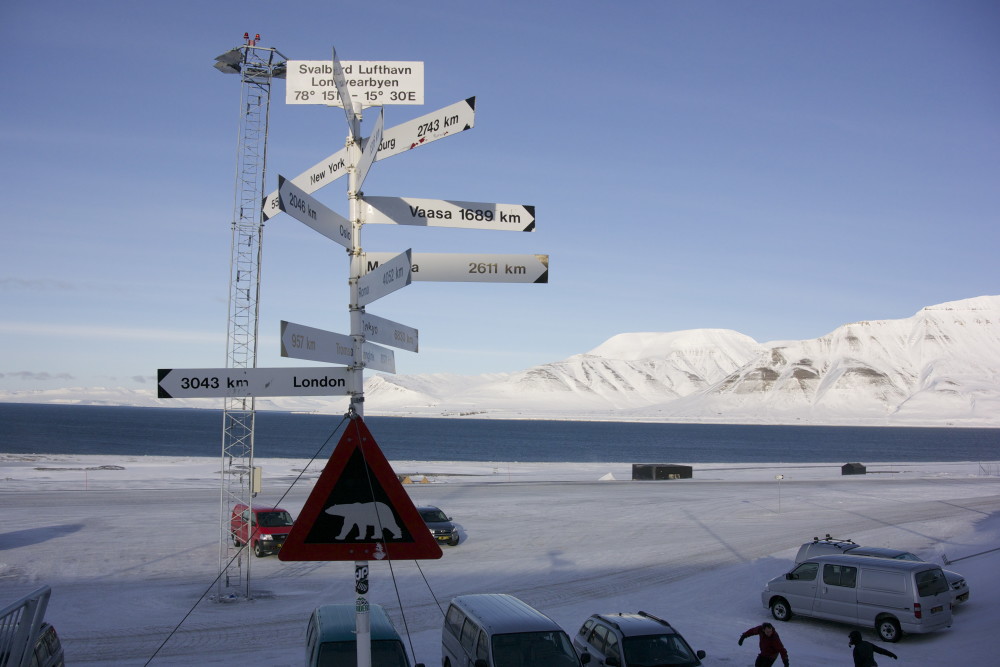 Late Monday night, at 03.00 AM, we were ready. At least as ready as one can get before a winter expedition. The weather had been rough all weekend and was no better on Tuesday morning. Another expedition group postponed their expedition start due to the weather, but we had a time schedule to keep so we headed out in the morning as planned. The expedition was now a reality, and the nervousness was replaced with the many tasks that awaited. Our focus changed from writing emails and organizing the trip to put one ski in front of the other. To hold a steady course and maneuver through the many valleys leading us further away from Lonyearbyen. Taking in all the impressions from the wild landscape, and be interrupted by snow mobiles headed out on safaris to show tourists the many treasured that lie hidden on Svalbard. 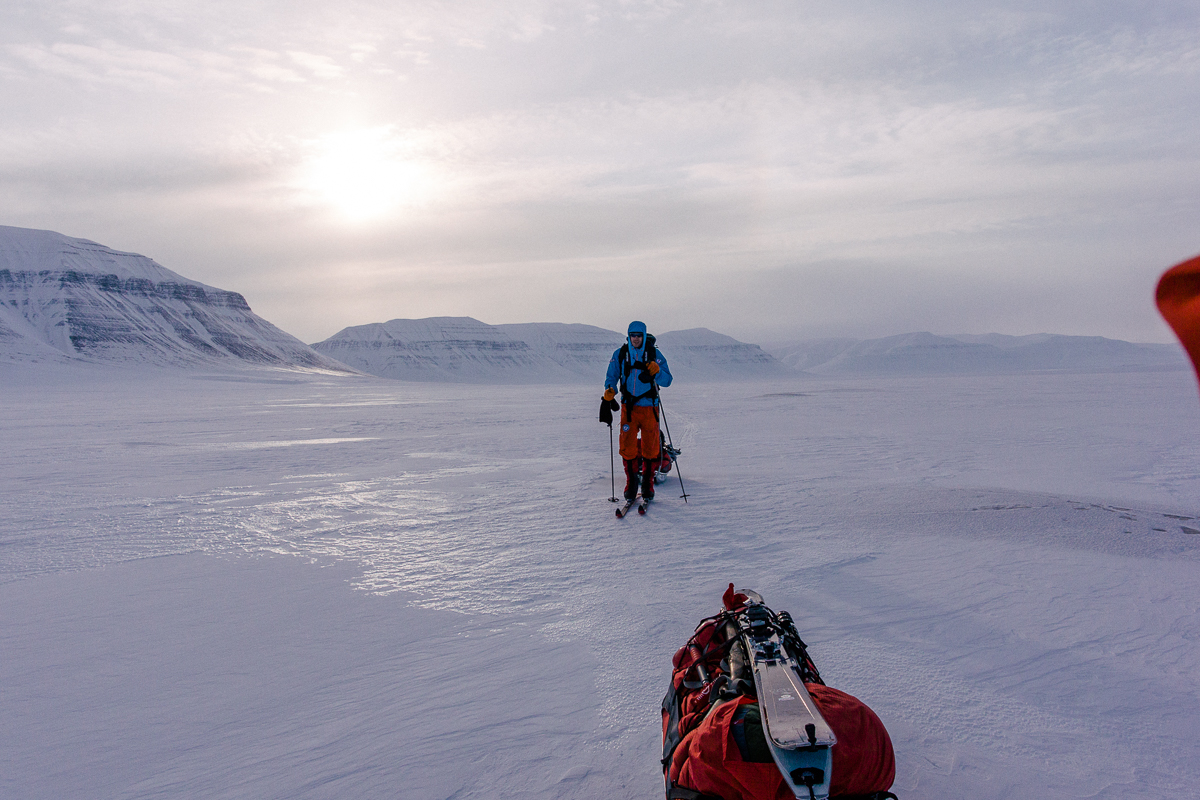 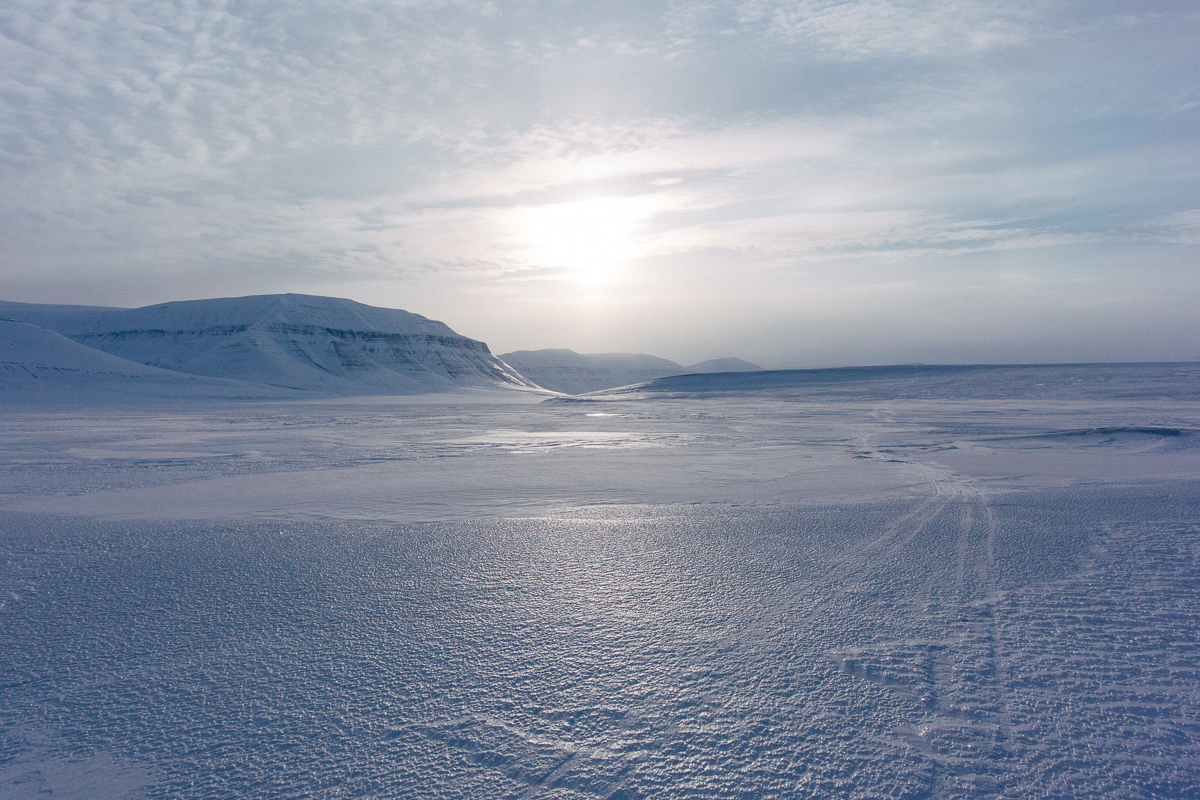 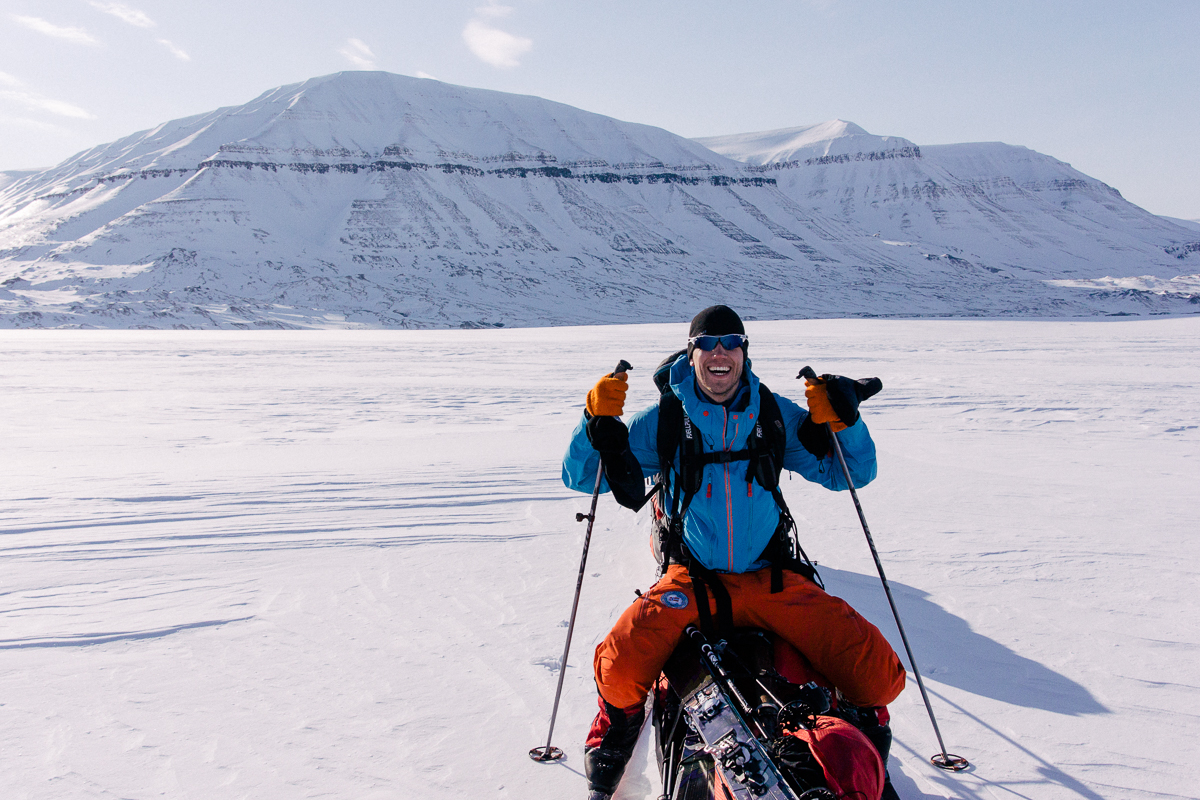 The two first days at the expedition were spent fighting against the challenging weather conditions as well as two heavily packed snow sleds and to improve a shaky technique with the tent and the trip wires. We spent three days to get to the Rabott glacier where we parted with the snow mobile tracks. This was a great relief for us as we wanted to create our own tracks at Svalbard. At that point, we felt that we were finally alone, in a big world of snow and ice. A fantastic feeling. The weather improved significantly, and if it wasn’t for the temperature drop that ended at about -35 degrees Celcius, it would have been the perfect Easter holiday weather. 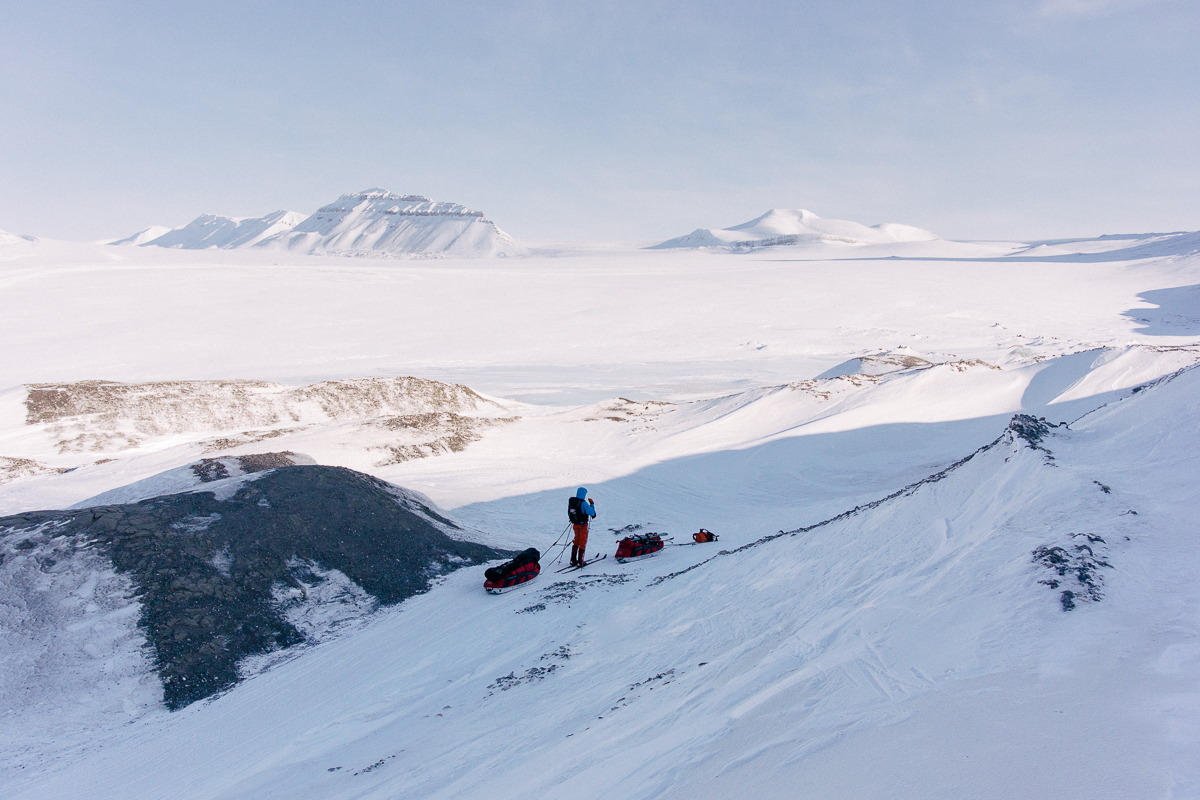 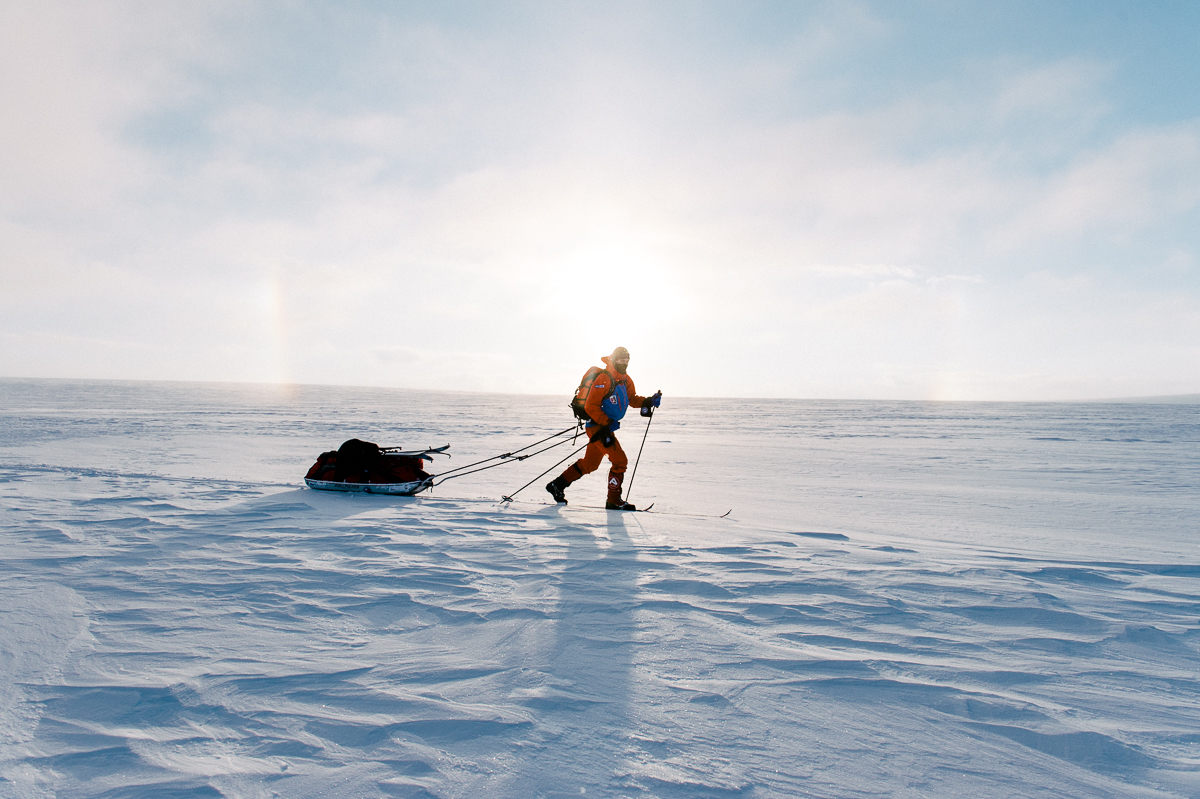 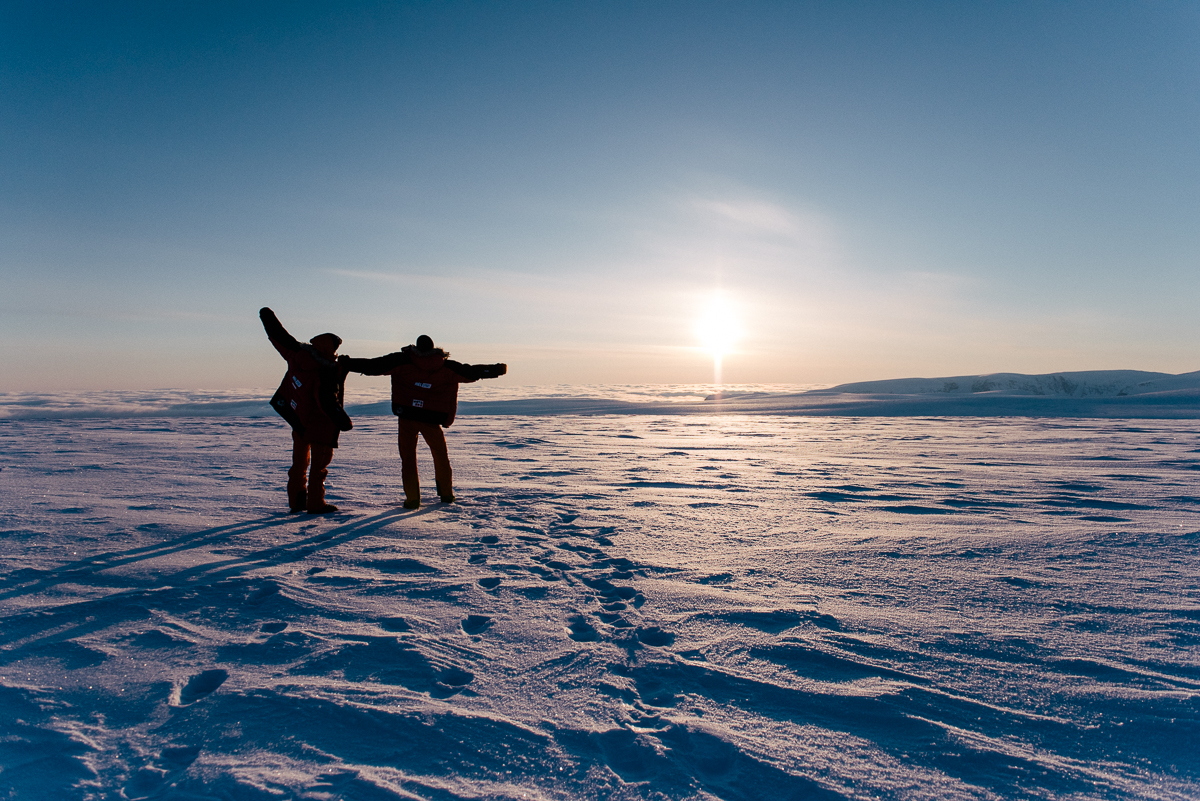 It was a big relief with the nice weather, even if it got much colder when the clouds disappeared. The routines had been quickly incorporated during the period with bad weather. Our individual tasks were defined and refined and suddenly the camp could be ready in less than 30 minutes, with tent and trip wires ready for the night. The days consisted of setting up and pack down the camp, ski all day with 50 minutes of skiing and 10 minutes of food consumption. The lunch break was a bit longer to account for the extra time it would take to eat 1500-2000 kcals. After 7-8 hours of skiing, it was time to locate a new camp area and get to work to get the tent and the trip wires ready for another night in winter land. Water was being heated while updating the outside world using our satelite transmitter, and the diary was updated. It is amazing how the thoughts are wondering in all directions during the expedition. We find ourselves thinking about nothing and everything, and the time flies by. The next moment our energy can run out and we look at the watch every minute hoping for the watch to speed up towards another 10-minute break. Some hours feels like five minutes, and some hours feels like days. 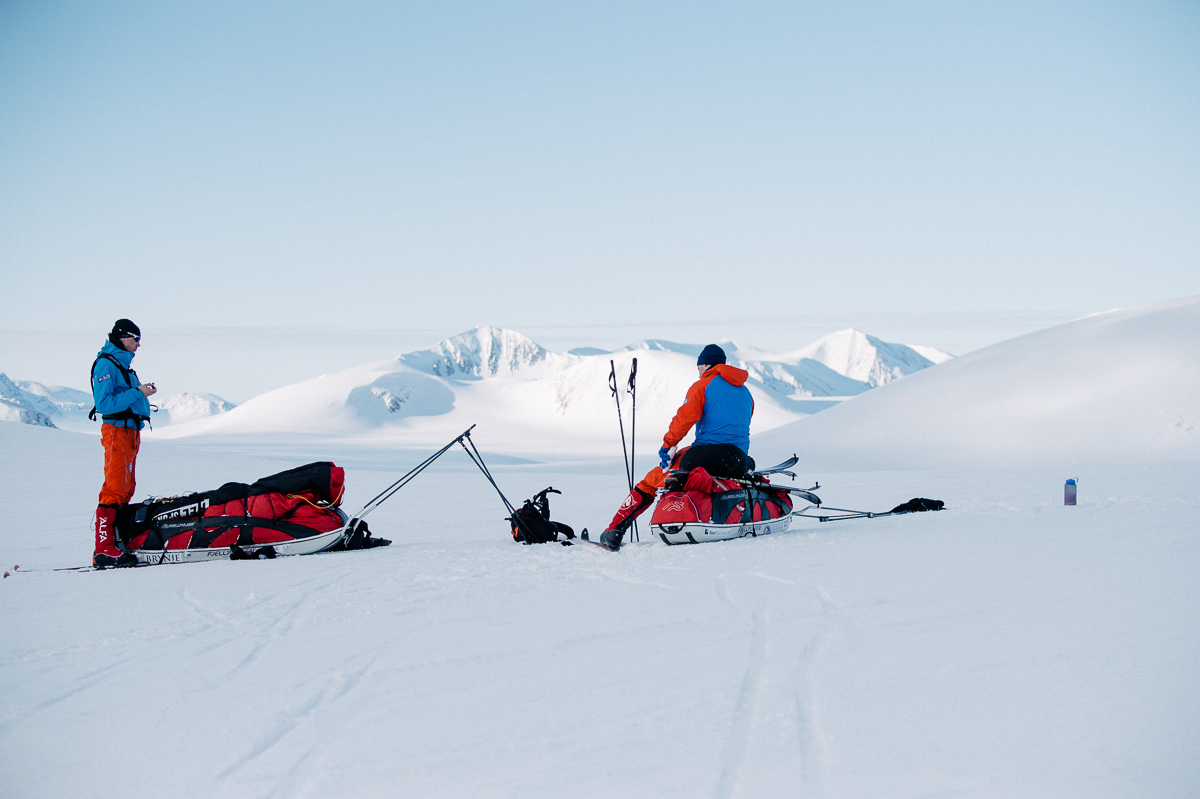 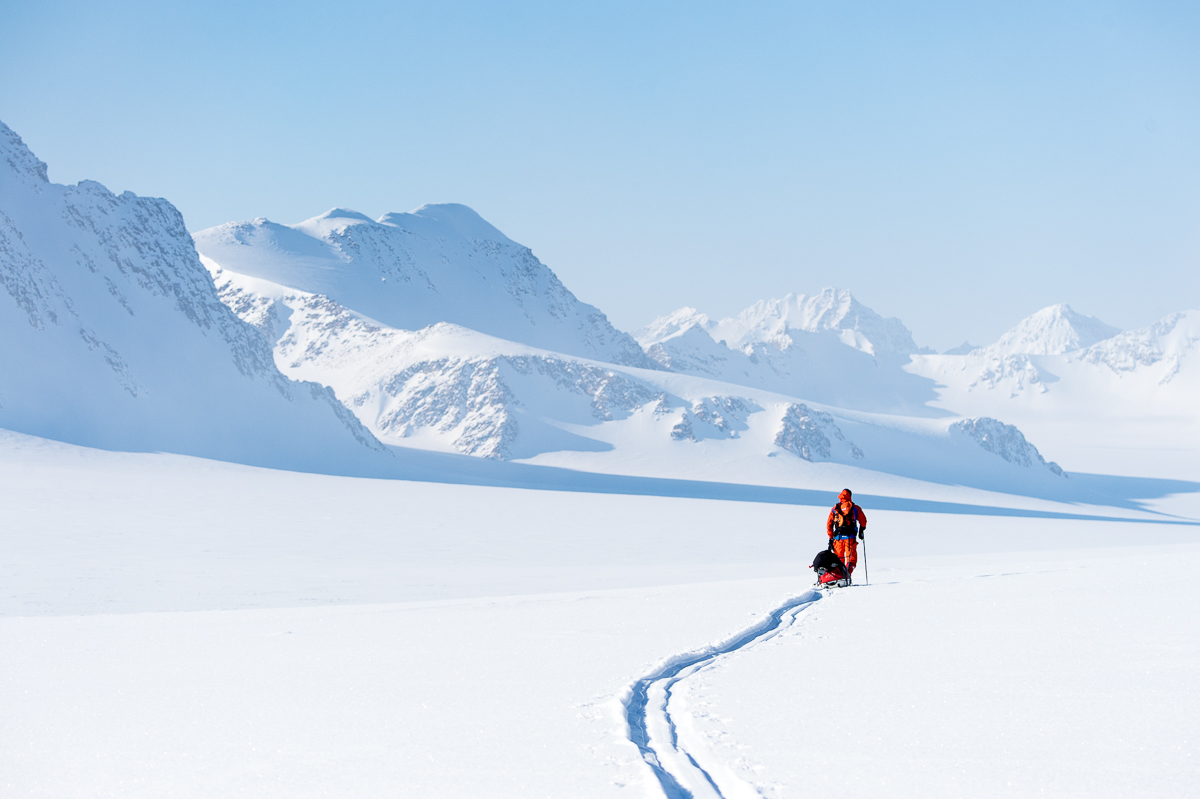 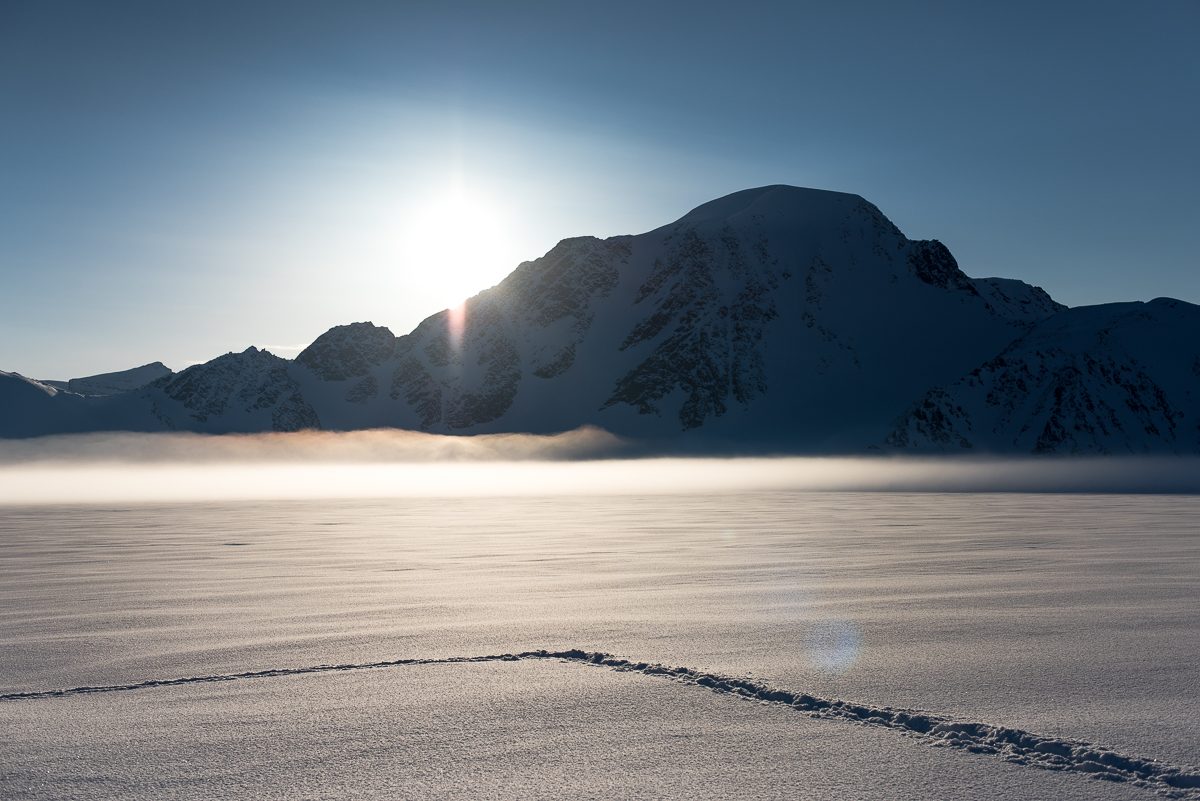 The following days consisted of going up and down at glaciers, in varying weather, through a fantastic landscape. Something that we found very special to Svalbard compared to home in Norway, is that everything is so magnificent and big. What looks like a medium sized mountain or a small valley that you can get through in a couple of hours takes a whole day. What looks like a kilometer is in reality ten. This will allow for studying and looking at the landscape for what feels like an endless time period, and is truly relaxing for the mind. It feels like the connection to the outside world is broken, that the whole valley you are in is only yours, a secret valley full of snow and ice. To spend an hour getting over the last incline of the glacier, with a rewarding new landscape and a whole different view from the top. All these details with so many impressions when they are given the time to settle in our minds. The contrast from the cloud of thoughts and daily activities in a busy city life is infinitely large. 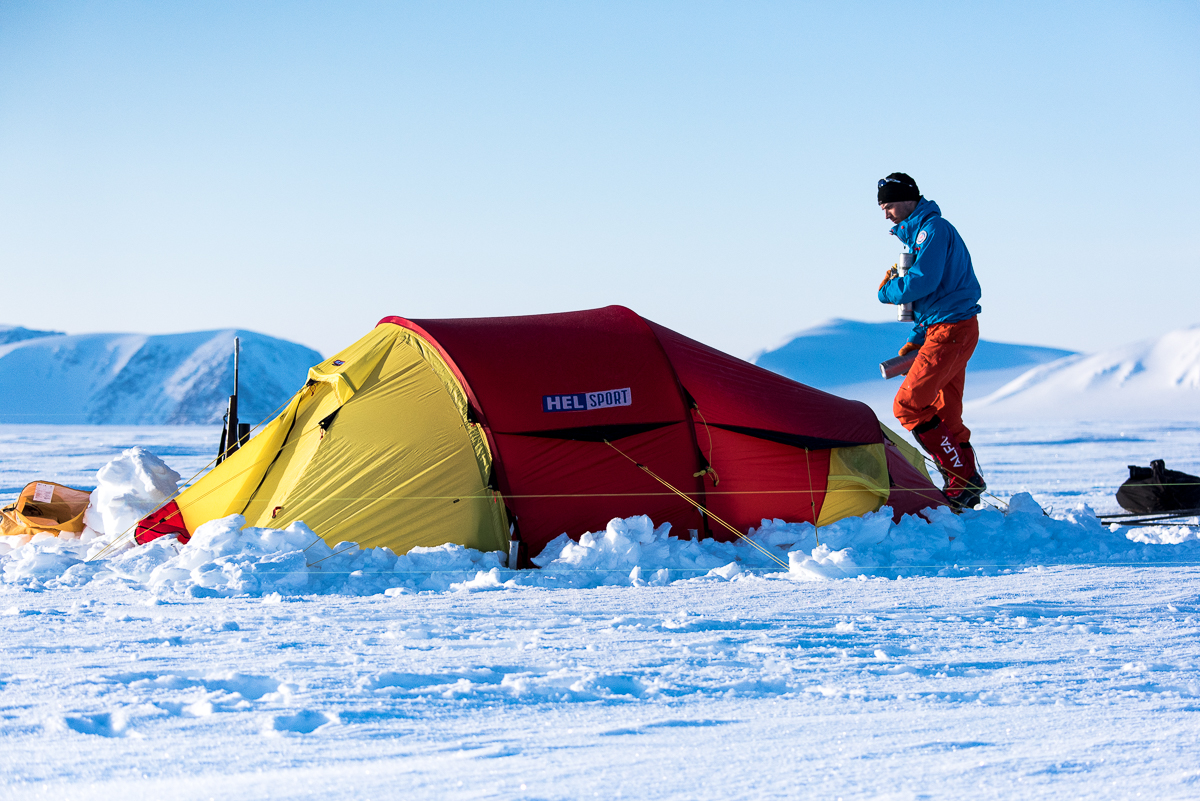 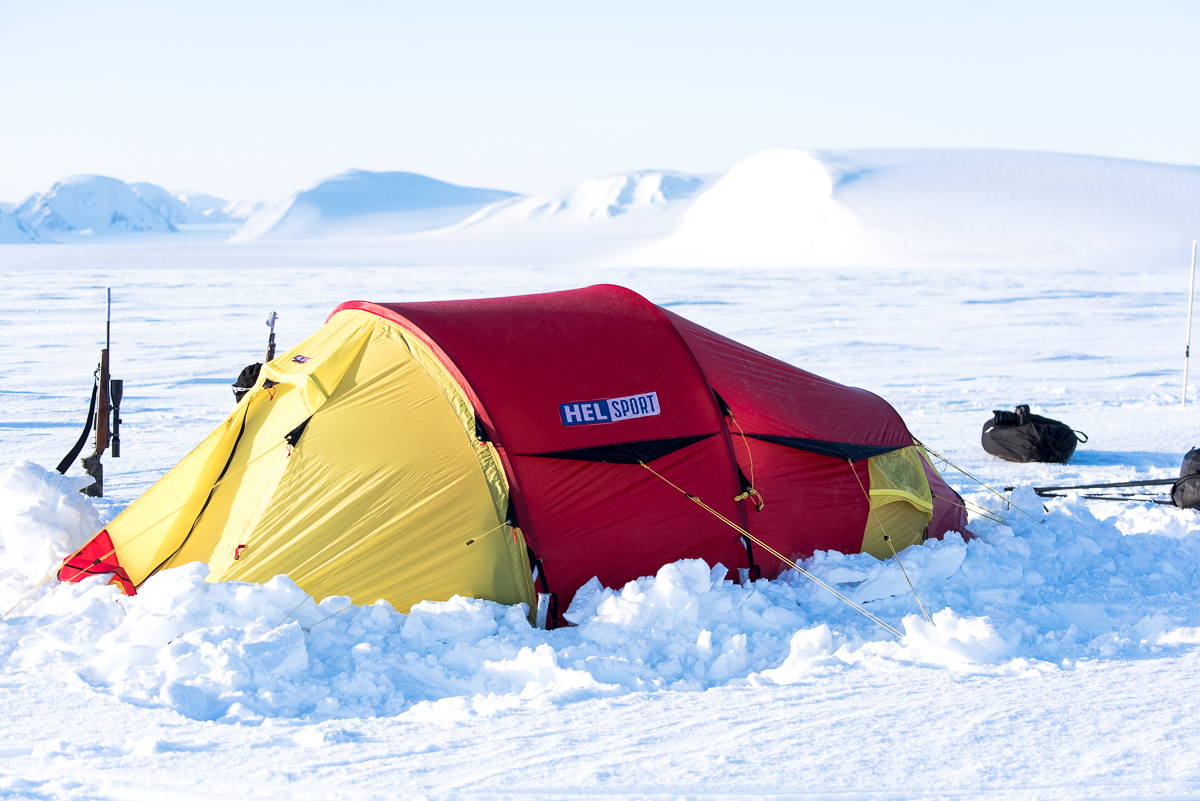 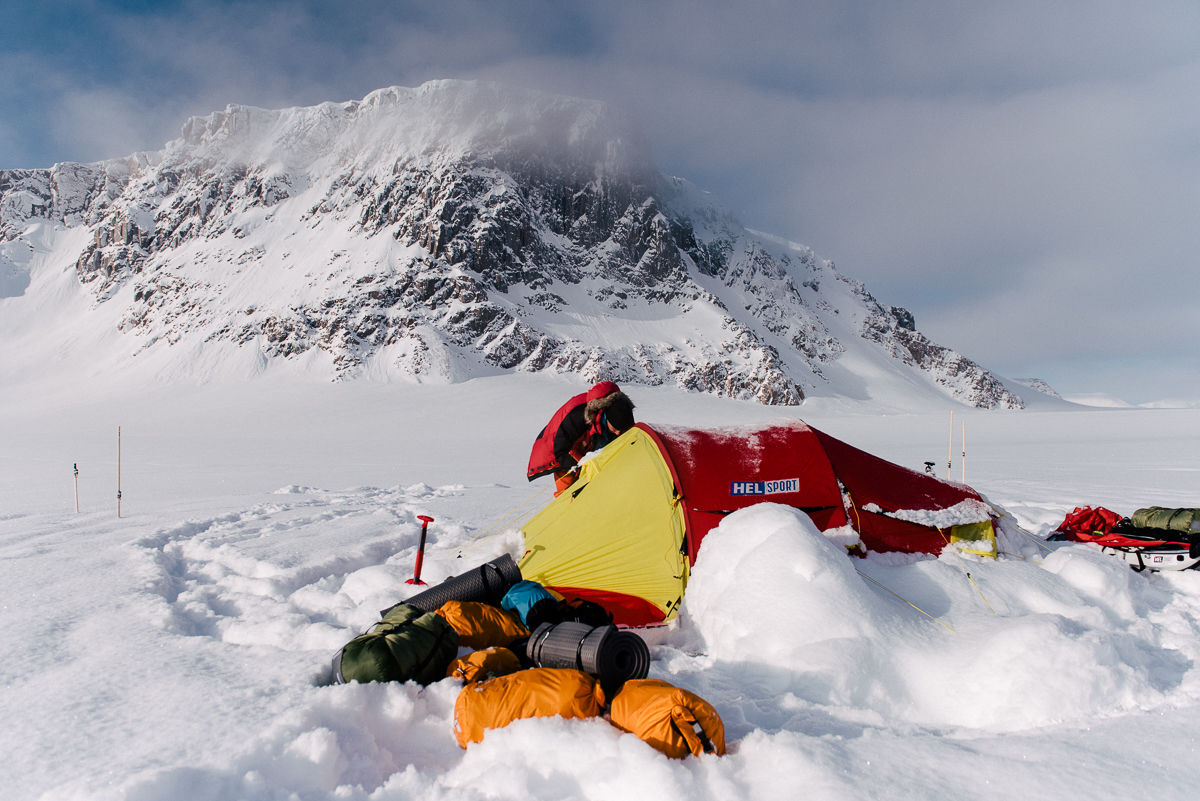 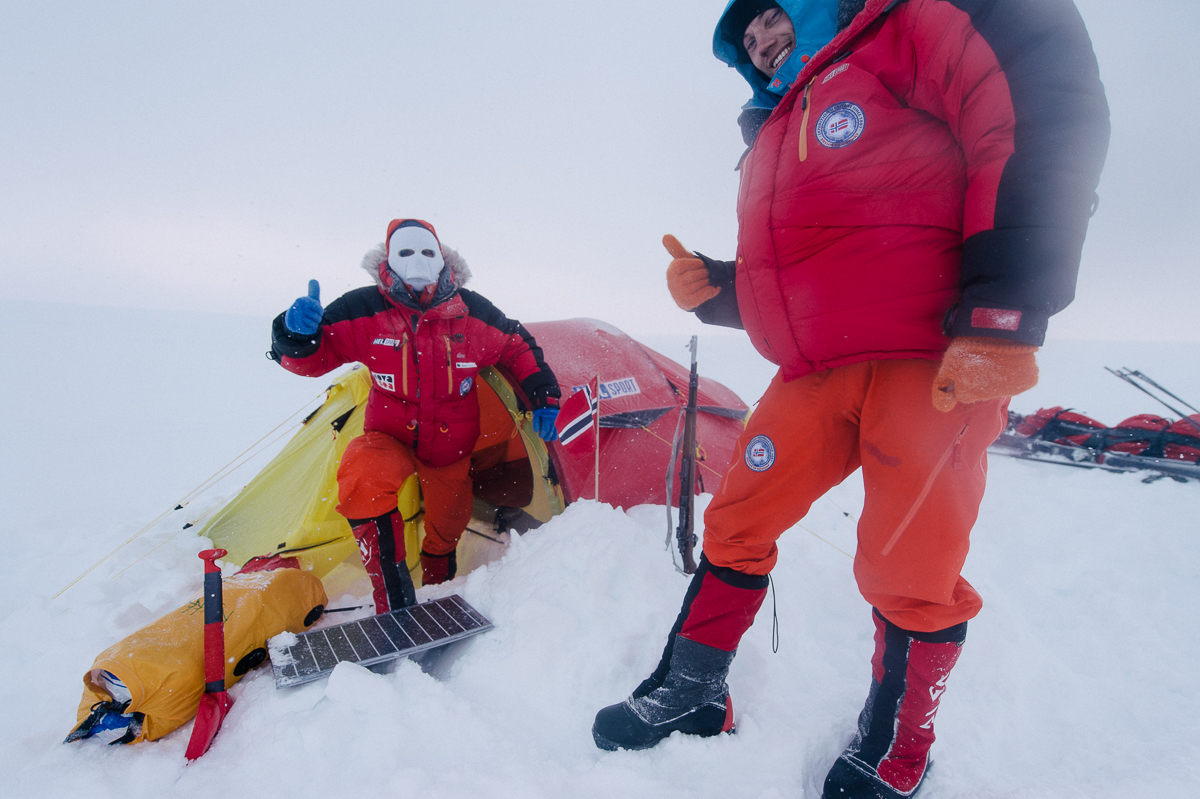 We met two expedition companies during the trip. The first was an experienced winter guide from Asker at the top of the Philips glacier who traveled alone, and a pleasant group of people from Litauen at the top of the Filchnerfonna glacier. It was nice to talk to other people, and listen to the experiences they had made for themselves during the trip, but you also feel a relief when proceeding. That somehow some time have been deprived of the great freedom to roam alone in the wilderness, and that we must rediscover human habits and courtesies. Before we yet again could return to the new and valued routines and simple tasks, the simple mind. 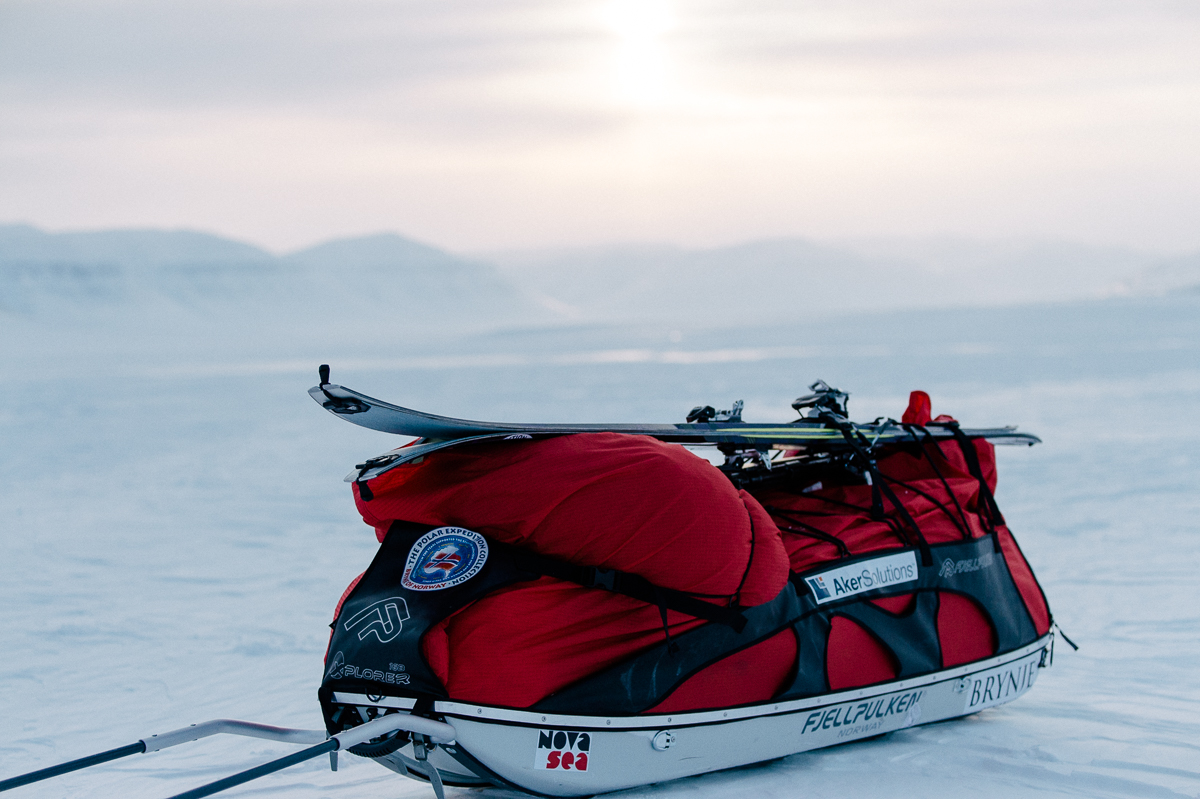 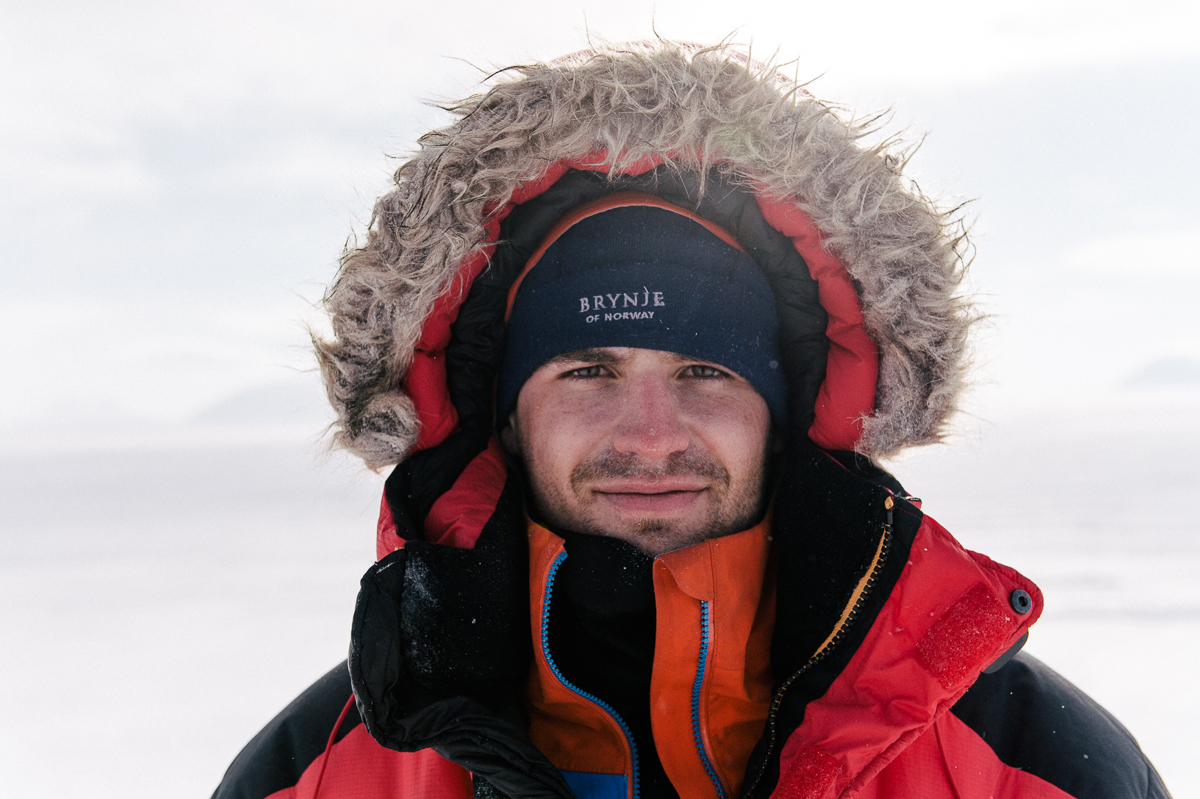 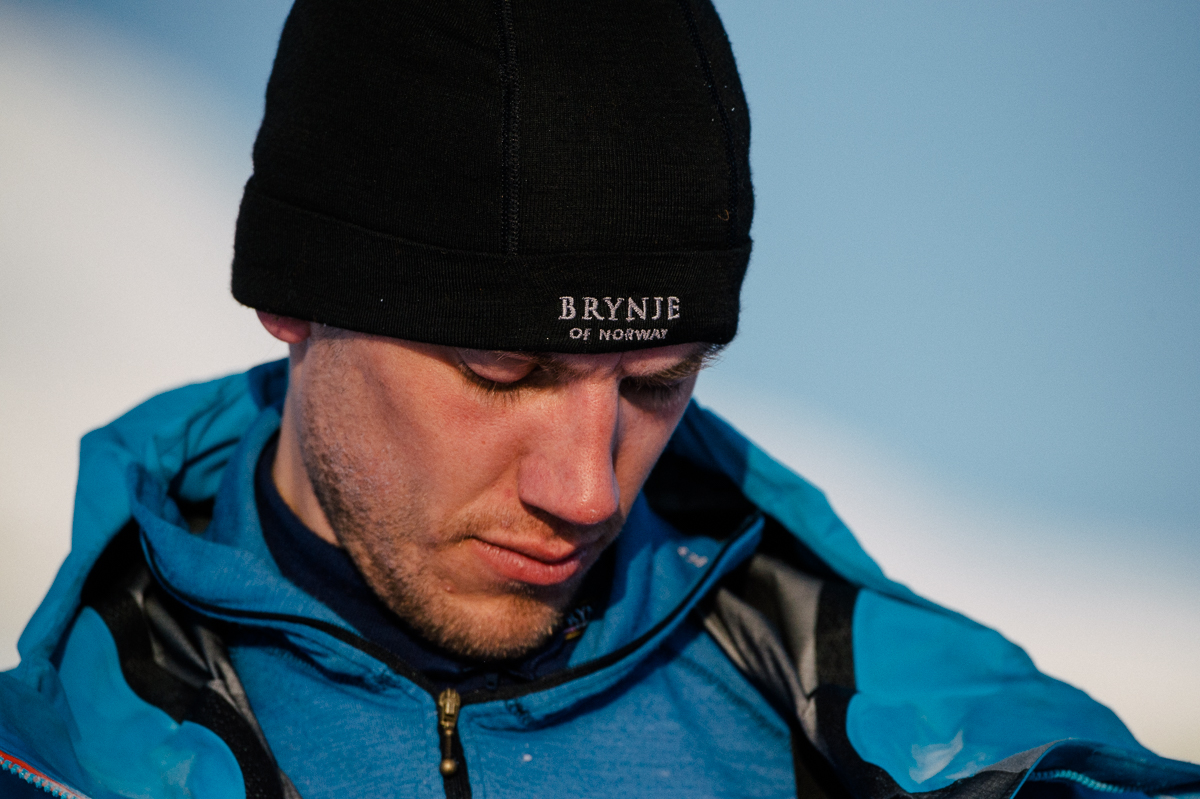 When only being two persons in an expedition company, a good relationship between them is fundamental. What distinguishes us from many others is that we can endure two weeks so close to each other without a singel fight or argument. Irritations, however, happens all the time, and leads to many good laughters and create a variety of funny moments. When Tor is obtaining cell phone coverage near the Newton top as planned, and is writing on his phoen with the keypad tone at maximum  volume. Or steps on both of Bjørn’s legs and all of his toes when he has forgot something in the snow sled late at night. Or when Bjørn has filled all the drinking bottles except for Tor’s bottle, and turned of the burner. But it never gets to us. And we choose to believe that is fairly unique. We have held together as good buddies through ups and downs through many adventerous years and have probably become tired of getting annoyed over small things, and now sees them as humorous and funny instead. Humurous, annoying, irritating things that make us who we are. Meaningless laughters, however, is something that happen all the time at Svalbard. A good example would when we felt like two 2-year old boys while eating peanut butter with spoon directly from the container and poured in cracker crumbs, one of the latest days. When most of the remaining calories is from peanut butter and marzipan, all you can do is laugh. 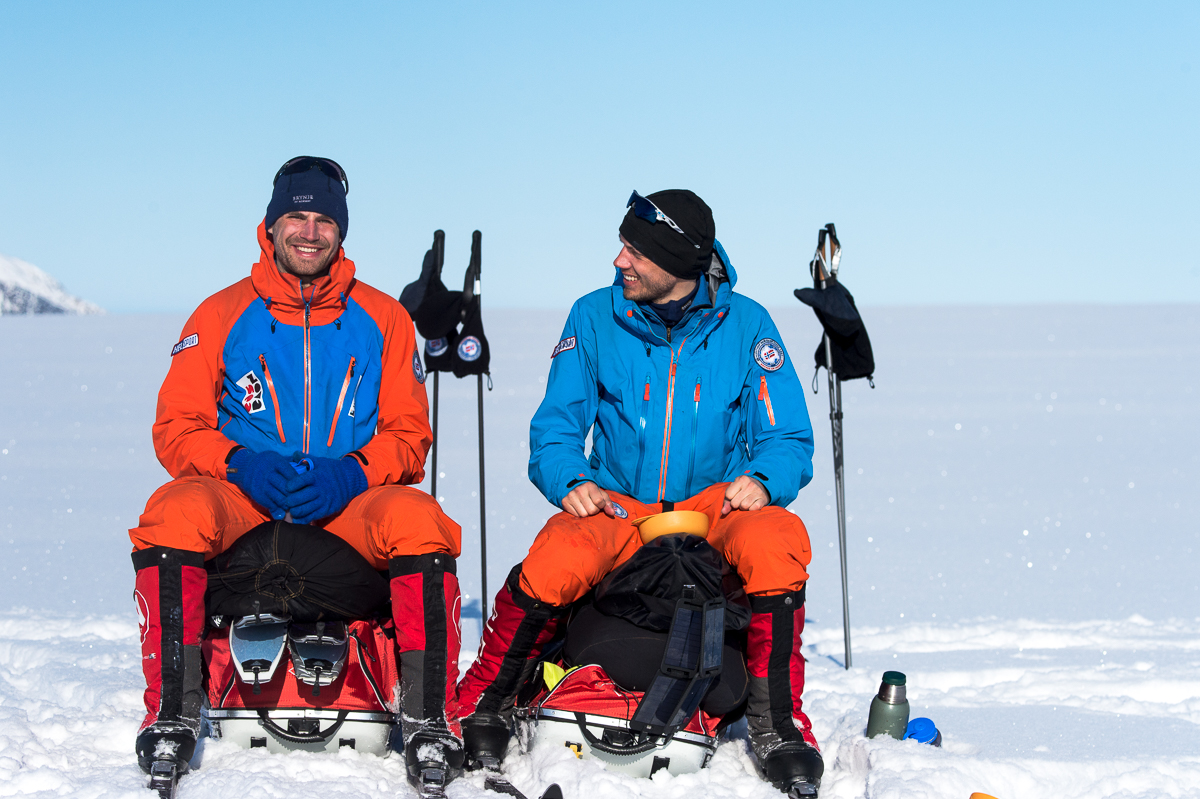 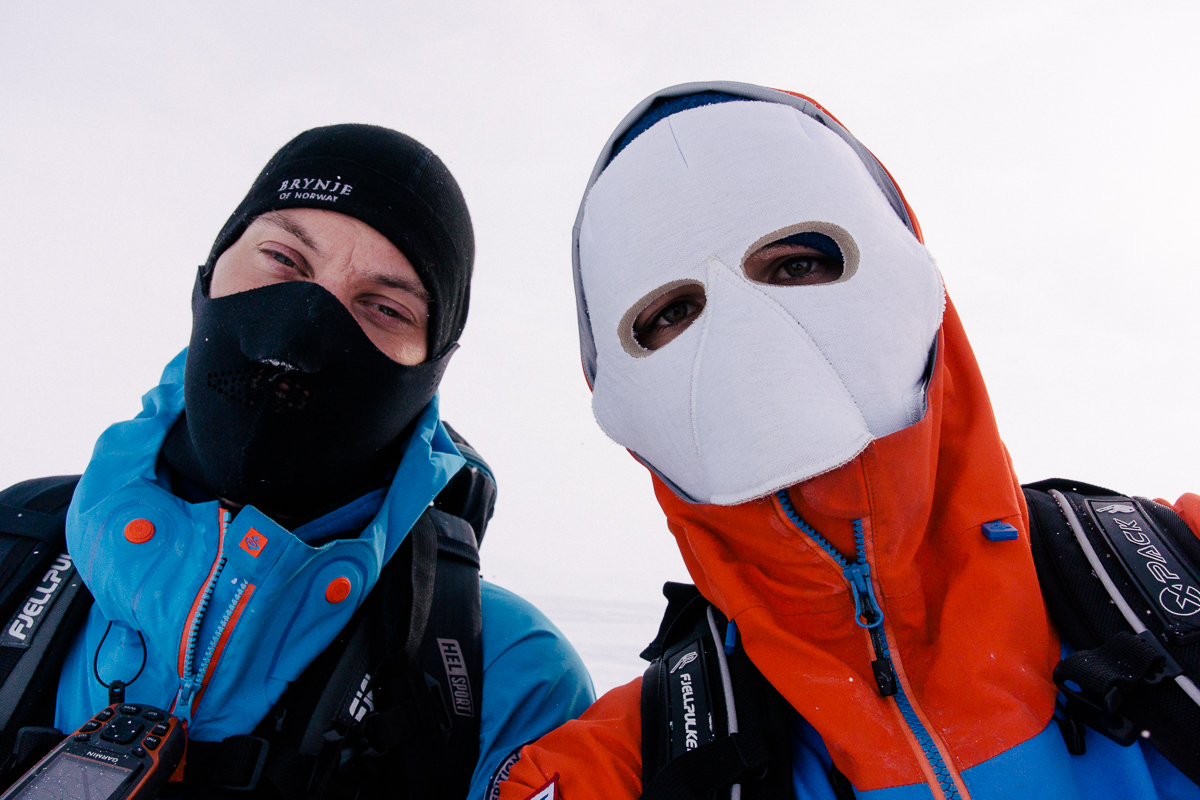 And so the time passed on, day in and day out. Weather could change abruptly, and we probably had a even distribution between nice and bad conditions. Still we were skiing every day, sometimes only by the GPS due to total white-out and sometimes in clear and sunny weather conditions. Endless conversations about nothing and everything. Endless quiet moments. The day before we were to climb the Newton top (1711 moh), one of the randonnee skis broke due to an overturned snow sled. With the use of gaffer tape and a broomstick (used for the trip wires), the ski worked alright for its purpose. The weather conditions were horrible at the day we wanted to climb the Newton top, but we conquered the Safari mountain (1357 moh) and the Neptun mountain (1524 moh) with great pleasure. 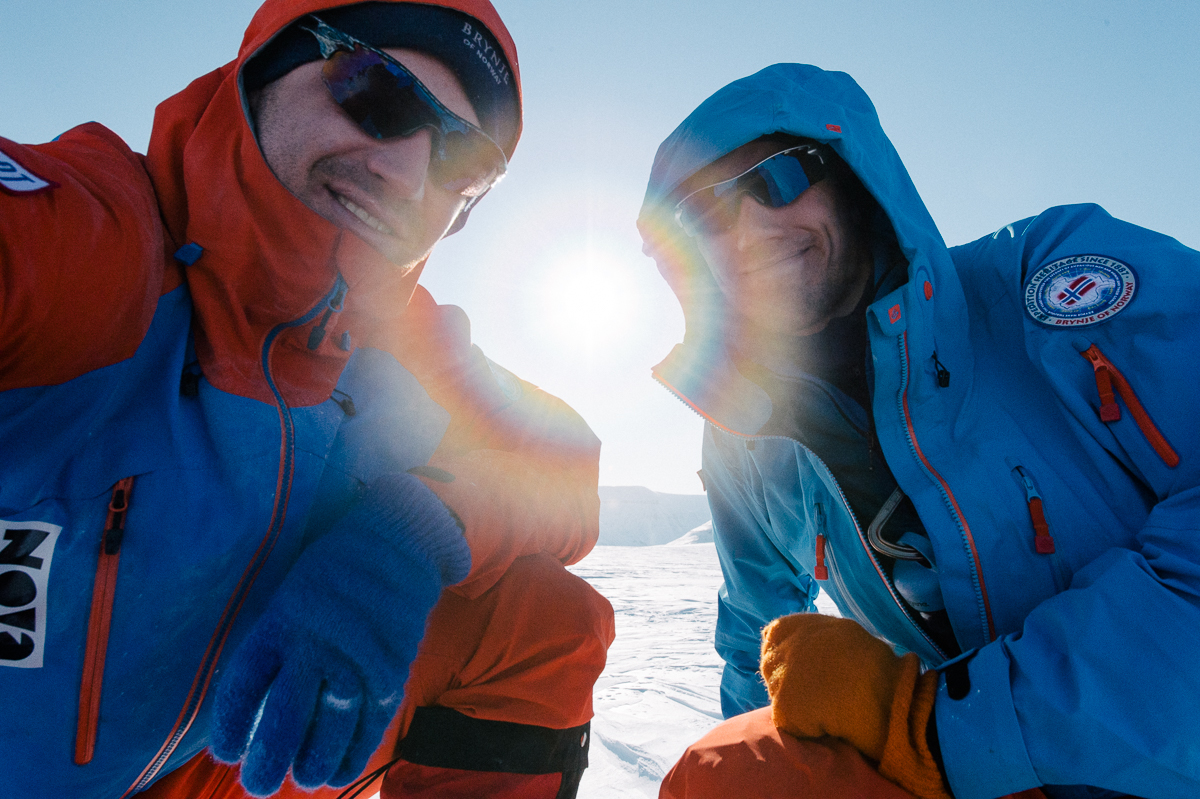 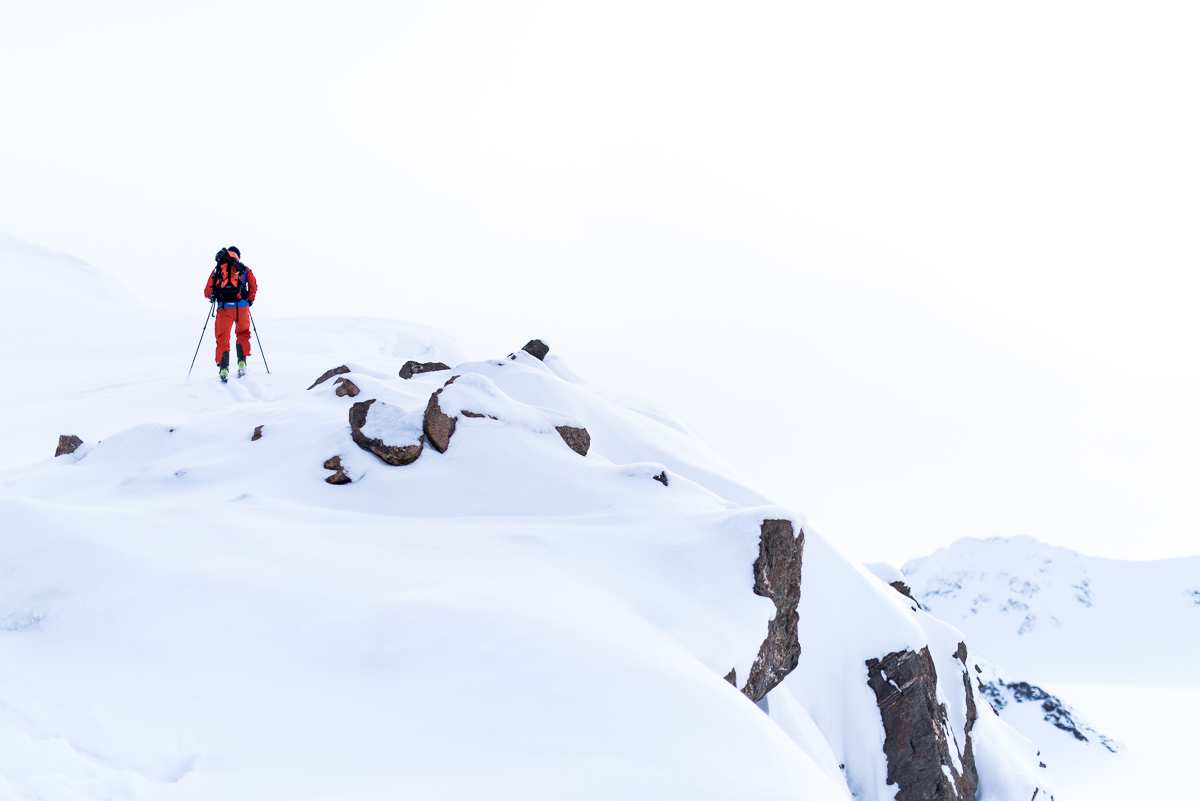 The expedition to Svalbard was an experience for life. Due to all the bad weather and difficult snow conditions, we couldn’t get all the way to Verlegenhuken as plannes, but we were picked up at Veteranen glacier near Lomfjordsbotn. In our opinion, the expedition was still a success, with no incidents (exept for the broken ski and Tor’s firework show when triggering the trip wires and the explosives by accident) and have gained experience towards next year at Greenland and the coming expeditions. It was funny how we started planning our next expeditions the very same day we returned to Longyearbyen. The travel back home to Bergen were spent planning and look at the potential for improvement for our next expeditions. 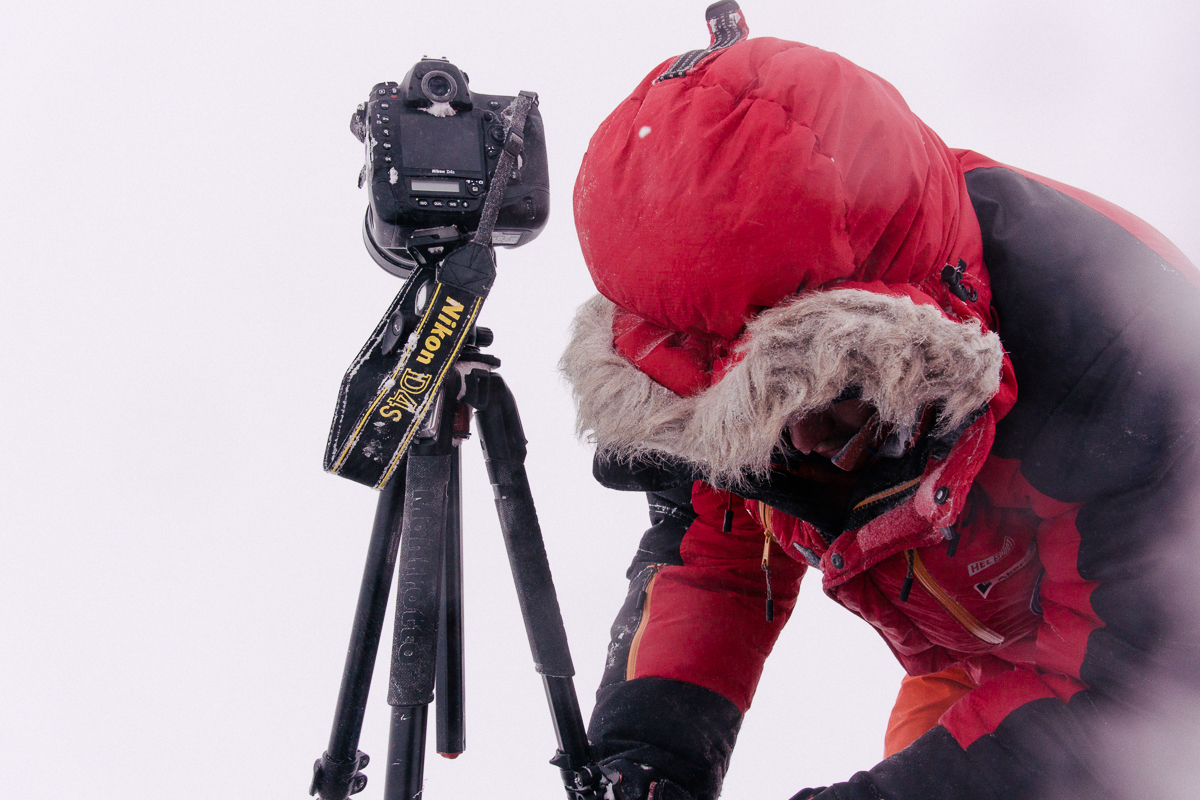 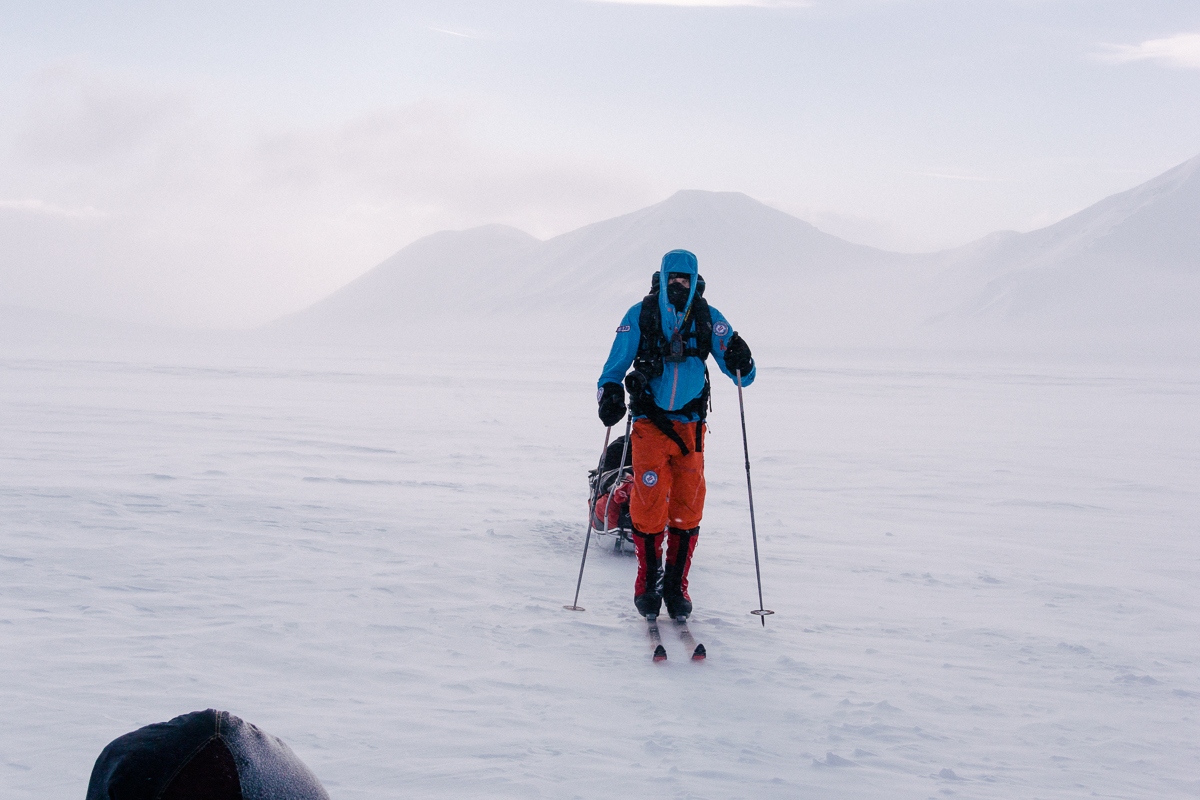 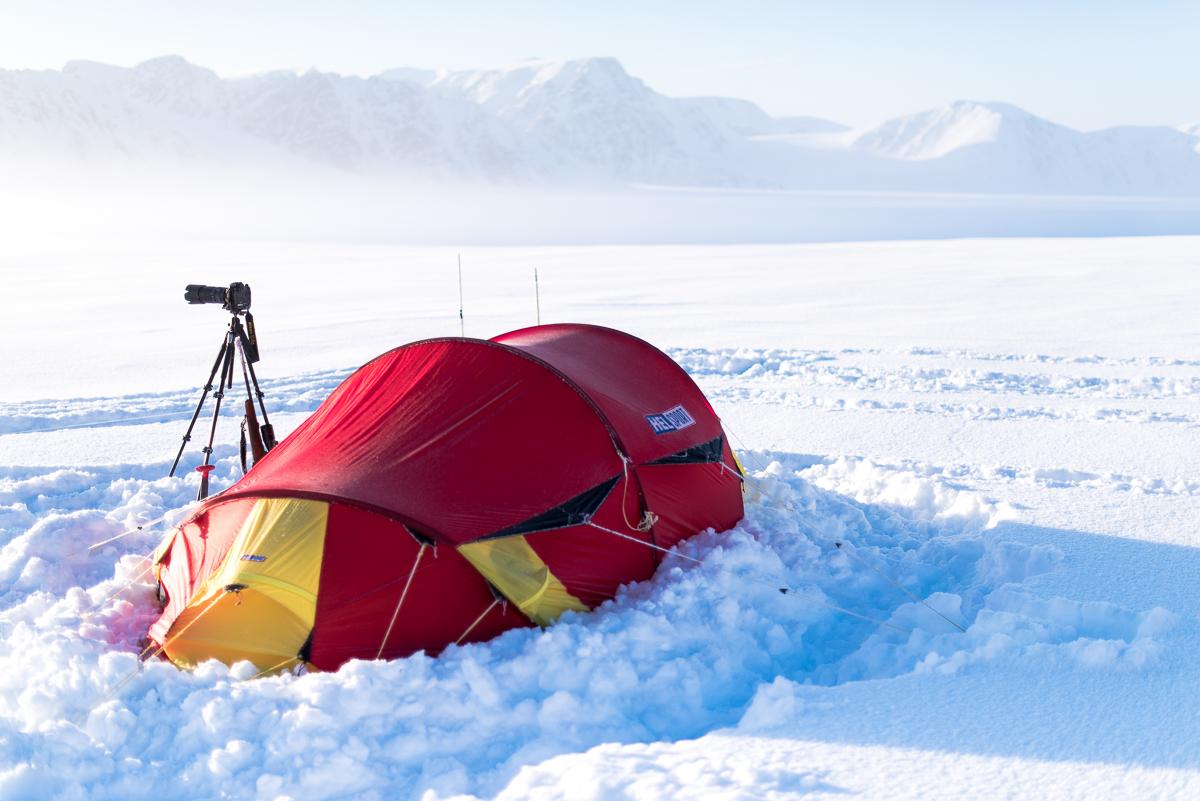 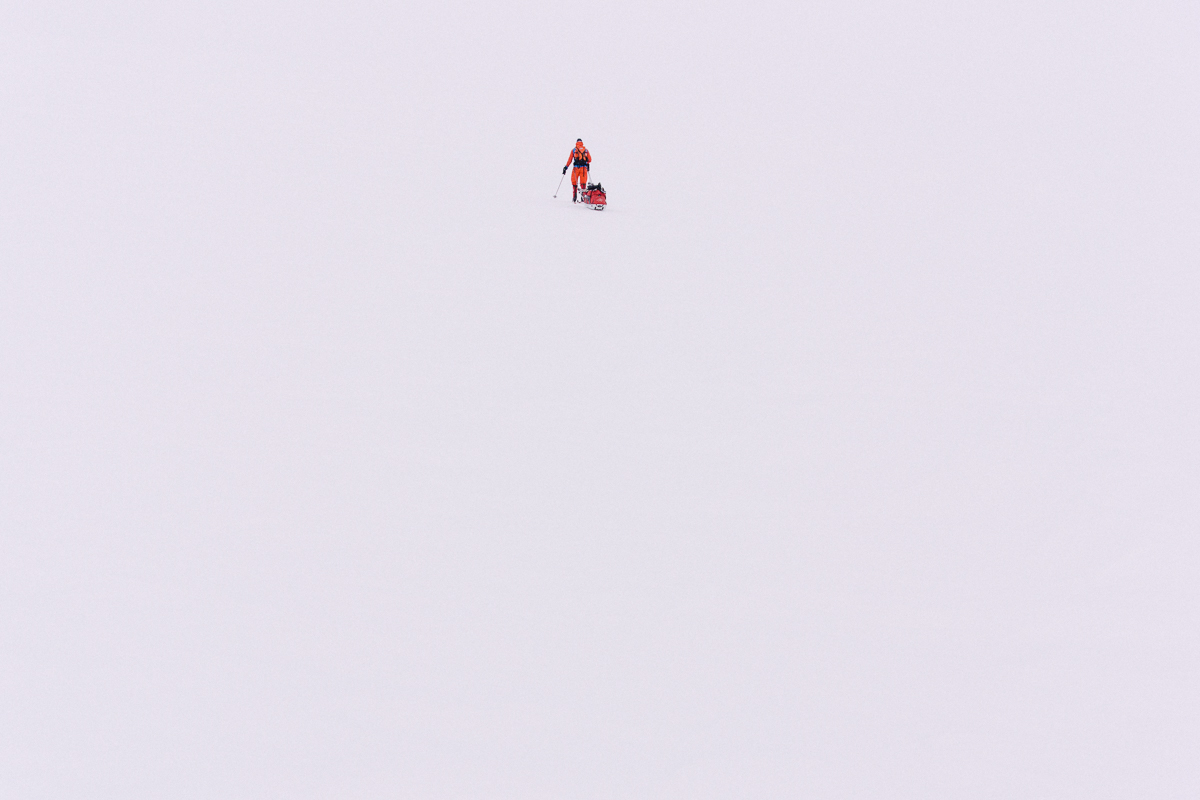 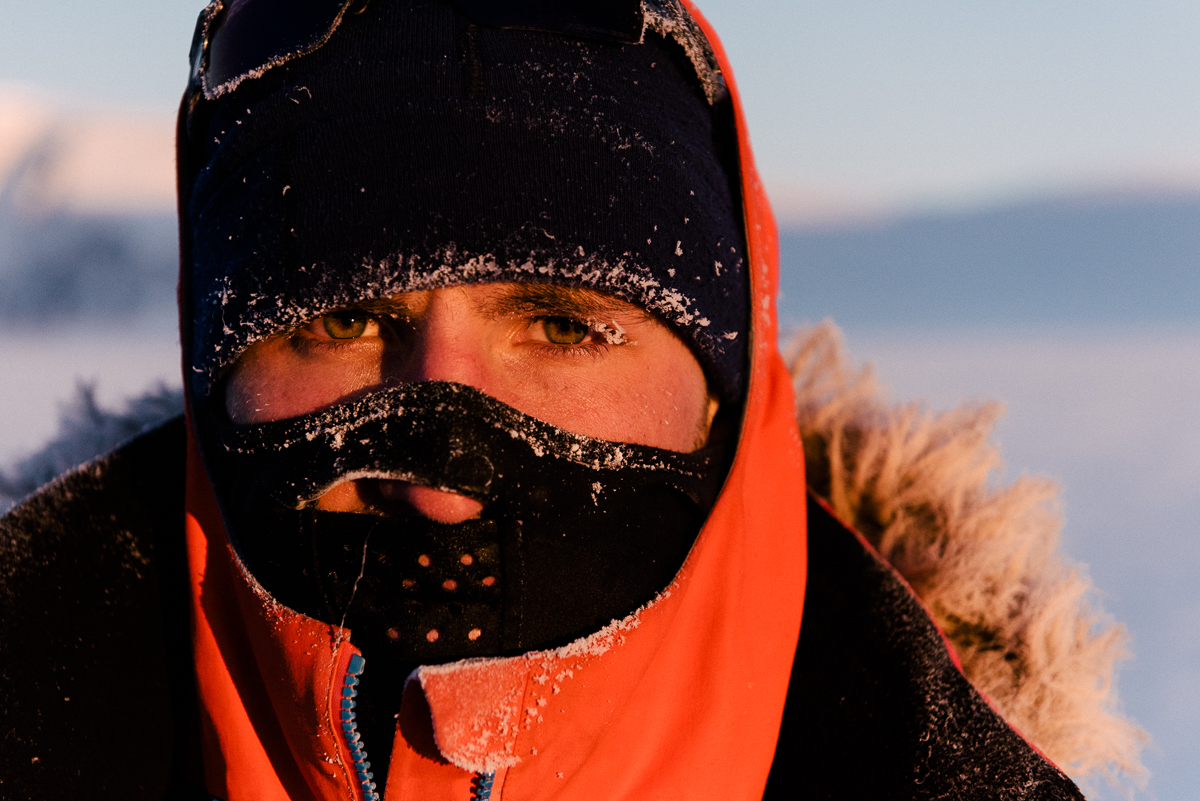 In April 2015 Norexplore will conduct an expedition from Longyearbyen to Verlegenhuken at Svalbard. The expedition will start in Longyearbyen in April 2015, and after skiing 290 km in 14 days, we will end up north at Verlegenhuken. The terrain will be very challenging through some parts of the route, because of mountains, rolling terrain, ice glaciers and rivers. The detailed route description will be shown live during the expedition (look at the top menu – Live from Svalbard). 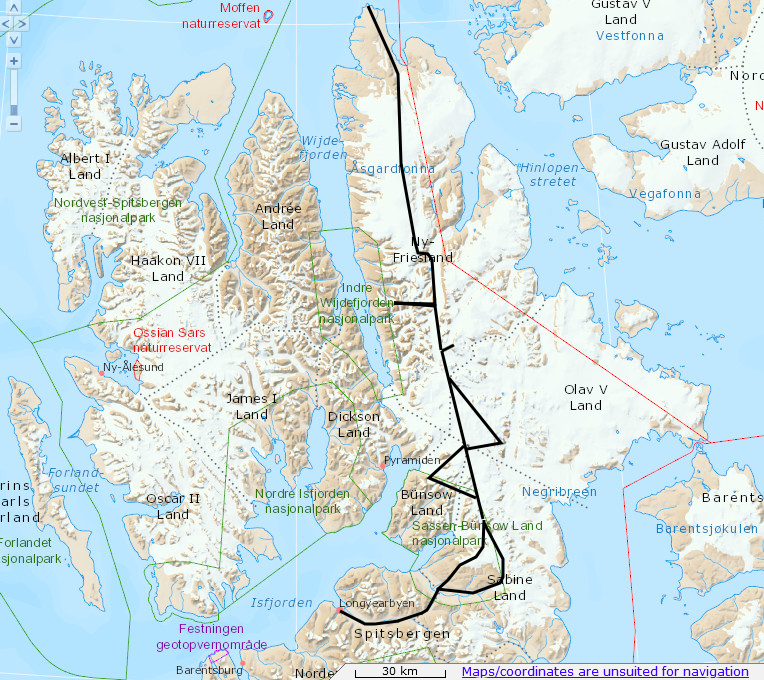 Nutrition during the days:

Breakfast: Cereal of oats, nuts, raisins and some oil and some vitamins

Dinner: Real Turmat with hot water and maybe a chunk of butter

As both of the expedition members going to Svalbard are triathletes and hunters, we are already performing 1 or 2 hard workouts every day. The training weeks range from 10 to more than 30 hours (we rarely have time for the 30-hour weeks), and the hours are distributed between running, tire pulling, swimming, biking and skiing.

A typical training week: Note that we are doing a lot of stretching and work on the foam roller in addition to the training, and this is vital for our muscles and body to get through the training. This allows for better range of our legs and arms, the blood flow increases and we feel better. The food intake is very high, and we try as far as we can to eat clean and natural, however the occasional chocolate and treat are much appreciated on the longer hikes and runs. We keep the water intake fairly high as well.

Stretching, refueling our batteries and focus on school and other responsibilities 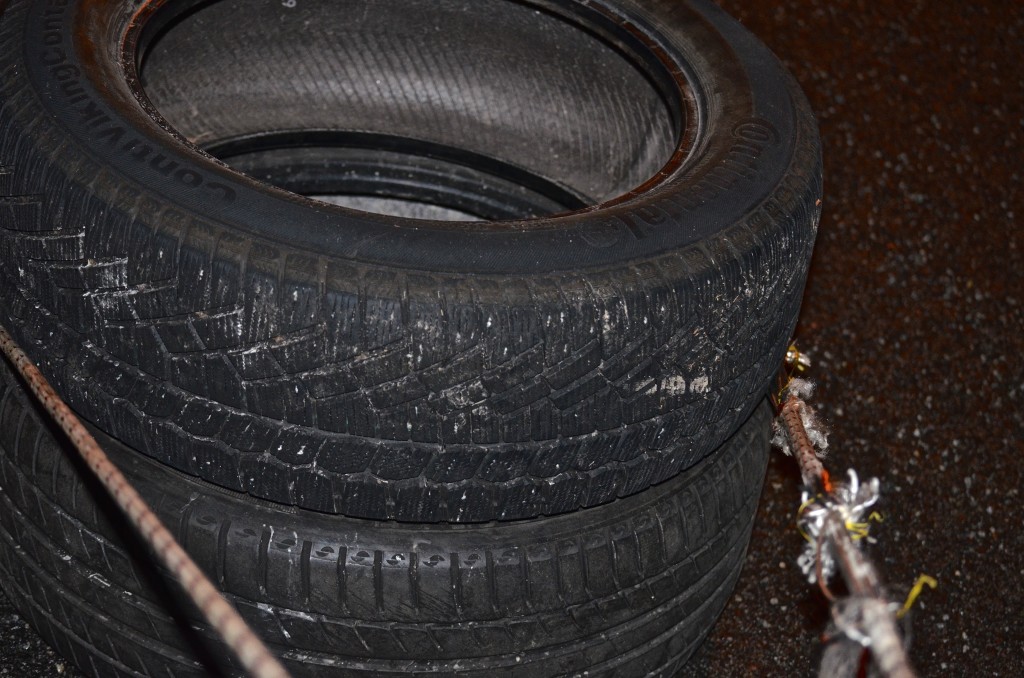